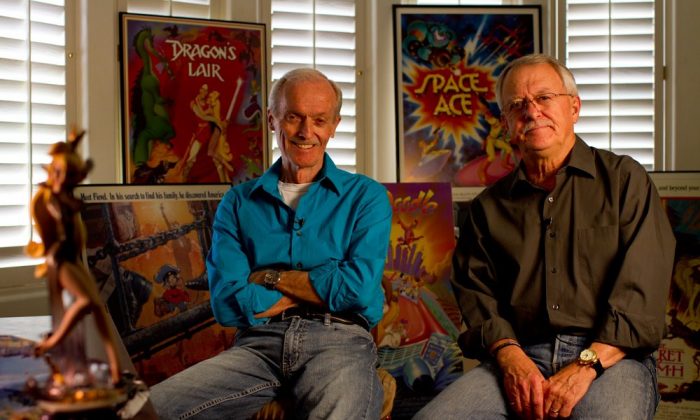 Filmmakers Don Bluth (L) and Gary Goldman (R) sit in front of posters of some of their works, including the games "Dragon's Lair" and "Space Ace," and the films "An American Tail" and "Rock-a-Doodle." The two are now hoping to rekindle traditional animation with their upcoming film, "Dragon's Lair." (Don Bluth Animation)
Entertainment

When Walt Disney was in a room filled with artists and musicians, something magical really did happen. The animators gathered around Disney were pioneers of a new artform, and they brought to that art the care and depth that was still the norm of craftsmanship.

Director and producer Don Bluth remembers it well. He worked on “Sleeping Beauty” at Disney Studios when Disney was still there, and said in a phone interview the film was “supposed to be a new level of art” with a budget as high as “Ben Hur.”

“Walt said animation is already getting too expensive,” Bluth said, “but I had a wonderful experience of watching the animators draw … the whole thing had a sort of magic to it, but all of that has been pushed away.”

“Maybe it’s time to bring it back,” he said.

Bluth is hoping to do just that. He and director and producer Gary Goldman, known for films including “An American Tail” and “The Secret of N.I.M.H.,” are coming together once again to breathe new life into animation with their upcoming film, “Dragon’s Lair.”

The film pulls its characters from their popular 1983 arcade game by the same name. And they plan to recreate the fantasy world of the bumbling knight and lost princess with traditional, hand-drawn animation, and with a few tricks that have otherwise been lost to time.

They recently turned to crowdfunding to finance a “sizzle reel” for the movie, which they can bring to studios and use to pitch a full-length feature film.

Just three days after they posted the project on crowdfunding website IndieGoGo, it reached half its quarter-million-dollar goal. At the time of writing this story, with 11 days still left on the campaign, it has already far surpassed that goal with $331,000.

If the campaign’s success—and comments from backers—have shown Bluth and Goldman anything, it’s that the audience wants traditional animation back.

The Secrets of Walt Disney

There’s something about films in the days of Walt Disney that endured the test of time—in a way that no other films have.

The films really are timeless. They’ve endured shifts in cultures and tastes, and they have something filmmakers today still try to replicate.

Goldman said there were “lots of techniques that people with Walt were trained with, but that aren’t widely known outside of that [circle].”

The experience becomes more lyrical. It’s easier on the eyes, and I think Walt knew.
— Don Bluth, director and producer

These days, animation is done more like a digital puppet show. A studio creates computer-generated bones and joints over a character, then program different animations for each part. When the filmmakers want a character to move across a scene, they use the computer to drag it across, then activate a preprogrammed walk cycle.

With classical animation, there were many subtle tricks that haven’t translated well to computer animation. Yet, these tricks wove the production into harmony, and gave the films visual and musical depth that now is hard to find.

In the days of Walt Disney, animators kept time by using a set tempo, which kept the animation in harmony with the music. Since the animation had a tempo, the musician could come in after and match it perfectly with a musical score.

“If animators are trained to do that, the experience becomes more lyrical. It’s easier on the eyes, and I think Walt knew,” Bluth said.

Watch carefully one of the films Bluth has directed, whether it be “The Secret of N.I.M.H.,” “The Land Before Time,” or “An American Tail,” and you can see this trick in action. Characters step and bob along with the beat, and the whole production moves together in a single orchestration.

Bluth said, “Classical animation is something Walt came up with himself—Walt actually brought it into a real artform.”

He noted that Walt Disney called the director’s room the “music room,” and even had a piano in it.

A Film With Soul

“I think the computer generation hit us like a huge tsunami, and everyone is in with the machines and digital, and everything that went along with it,” Bluth said.

“But after a while, computer animation—unless it’s a wowee story—starts looking like the last one I saw.” You could probably take characters from one film, drop them into another, and they’d fit in just fine, he said.

With classical animation, however, each film had a more distinct style.

Art is a reflection of the culture, and what happens is as soon as you start to behave a certain way in the community, it shows up in the art.
— Don Bluth, director and producer

“I think what the difference is, is something called soul,” Bluth said. “If you get into the hand-drawn animation, it has something different in it, where you see the soul of the artist.”

In animation, Bluth noted, computers tend to fade out the human touch. Animated characters are shaded by computer graphics. The physics of different objects are automated by the software. It’s something impersonal and practical that pulls away from the fantasy and imagination that’s the soul of art.

“Art is a reflection of the culture, and what happens is as soon as you start to behave a certain way in the community, it shows up in the art,” Bluth said.

With the upcoming “Dragon’s Lair” film, Bluth is looking to create a type of human connection, and this goes right down to the characters themselves.

When you watch Dirk, it should be like watching Charlie Chaplin perform.
— Don Bluth, director and producer

If you ever set foot in an arcade in the mid-’80s, you’re likely familiar with the main character of “Dragon’s Lair.” He was Dirk the knight, armed with a backpack and a sword, who set off into a dark castle to rescue the Princess Daphne from a dragon.

Goldman said, “We’re going to give the audience the backstory of who Dirk is, who is Daphne, what are their original stories.”

Dirk is meant to be a sort of hero-at-heart, a bumbling everyman. He’s actually inspired by Charlie Chaplin, someone who Bluth said is a kind of “symbol of what life is,” and who Walt Disney had even modeled Mickey Mouse after.

“When you watch Dirk, it should be like watching Charlie Chaplin perform,” Bluth said.

“He always wins and shouldn’t be winning, but you love him because he triumphs all the time,” he said. “He sits down at a table and eats his shoes, and he’s happy as can be.”

But Bluth also noted that he doesn’t want “Dragon’s Lair” to just be some form of empty entertainment. He said, “I think you have to tell stories that have some meaning. Stories should have a moral. Otherwise all you’re doing is tickling people’s funny bones and collecting their money.”

The bigger issue is bringing back the traditional style that Walt established, and not letting it disappear into the ethos.
— Don Bluth, director and producer

With Dirk, that story is about growing up. Bluth described him as “kind of a reckless little guy who doesn’t know his value. He just wants to have fun, but he’s of royal birth. He has to learn to take things seriously.”

At the same time, Bluth said he feels a real weight with the film. He noted that lately the box offices haven’t been kind to digital animation. For him, it’s not just about making another movie; it’s about showing Hollywood that traditional animation can still win over an audience.

When it comes to Hollywood, he said, “money is the thing that fries fish,” and he said if they see money can be made in a film that’s traditional, “it will happen.”

“We’re taking a big risk with this,” he said. “If it fails, it will harm the future of traditional animation.”

But he added, while it would be a welcome sight to get people behind a traditional animated film, “the bigger issue is bringing back the traditional style that Walt established, and not letting it disappear into the ether.”