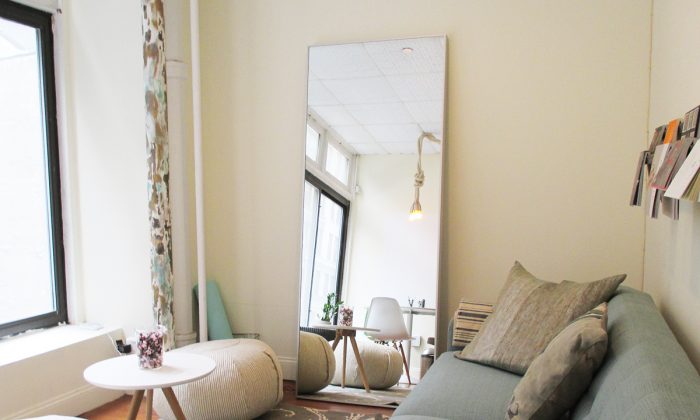 NEW YORK—Opportunity presents itself in many forms in the city. At just over 300 square miles, New York is the densest city in the country. Development and population growth are only set to continue, even as land prices soar.

But tiny pockets of real estate, underused spaces, have lent themselves to become economic drivers and creative solutions in both the private and public sector.

Julien Smith, bestselling author, public speaker, and entrepreneur, has long been obsessed with private space, which is a commodity in and of itself in urban areas.

In creating a simple, convenient way to provide busy city dwellers and workers with on-demand solitude, he came up with Breather—a platform that lets users rent space by the hour.

The startup of “beautiful spaces on the go” first piloted in Montreal, and then rolled out in New York City just weeks ago with four locations, lots of interest, and more to come.

“I think that, by and large, people believe that this is an idea whose time has come,” Smith said.

Breather unlocks thousands upon thousands of units, excess real estate in the city—space Smith said is essentially wasted—and turns them into light and airy, quietly curated spaces being marketed as temporary workspaces.

Many users have taken to it as a private office away from the office, using it for phone calls, Wi-Fi access, giving presentations to clients, or even a nap.

It’s for the person working at Starbucks who wishes it wasn’t so loud, Smith said, or someone with a few hours to kill before their flight and needs a quiet spot to work.

Breather’s rooms are $25 an hour, and are located in SoHo, Midtown West, and Flatiron in Manhattan. Users book a time and location through the Breather app or website, and receive a Lockitron code to open the room.

So far the company has been working with a commercial leasing agency, Manhattan Commercial Realty (MCR) to find these spaces. Though comparisons between Breather and other sharing economy companies have been made, it is not likely someone who sublets their apartment for a few days has a private office to lend out just as easily.

Breather will continue to expand throughout the city, MCR broker Chandra Henderson said in a statement. Henderson looks for rooms that are clean, quiet, and classy, and in places with a lot of energy.

“We have someone on staff, my co-founder, who works really hard making a space look amazing,” Smith said.

The rooms all have tables, chairs, desks, Wi-Fi, and enough space for large groups, as the main usage is for business professionals, Henderson said.

Artists are getting priced out of many neighborhoods that are increasingly zoned industrial, and city officials are paying attention. The city is now renting out space in underutilized public buildings.

Spaceworks, for example, was developed by the Department of Cultural Affairs (DCA) to help artists find space. It is currently in its pilot stage, with one location with rehearsal space in Long Island City (LIC), and another location with studios in Gowanus. Both are in privately owned buildings.

The demand is clear. About 50 applications flooded in for the first two art studios that opened. To date, around 200 dancers, actors, and musicians use the LIC rehearsal space on a reserve-by-the-hour basis.

Spaceworks is working with libraries in Red Hook and Williamsburg, and a building on Governors Island, to turn unused space into new studios and rehearsal rooms.

From the many focus groups Spaceworks held with artist communities around the city, affordability is the most immediate issue.

Short-term workspaces are nothing new, and there are companies in the city that have been offering these kinds of rentals for over 50 years. The city is trying to attract and retain small groups and companies in various industries like the tech and creative sectors. Shared workspaces with atmospheres from cozy to club-like were borne from necessity and garnered by government help.

Executive Director Paul Parkhill said affordability is the biggest issue—many artists are renting studios based on monthly cost rather than per-square-footage—but not the only issue.

“As a musician I know, beyond affordability, and affordability is a huge issue, it’s hard to find a good, clean space,” Parkhill said. “A lot of rehearsal spaces are accidental spaces that become work spaces.”

Musicians end up discovering a room in a church they can use to practice in a couple days a week, for example, but not the well-kept, soundproof rehearsal rooms they would prefer.

Creative energy and communities of artists have helped define the city for a very long time, Parkhill said, but with space becoming more expensive there is a risk the city will become a place where art is primarily performed and exhibited, not created.

Federal data shows New York City and Los Angeles are largely the cities creative people gravitate toward. New York City has the highest concentration of nonprofit arts organizations, which bring in $3.8 billion a year according to city data.

“There is some risk that it will cease to be a place where art is made on a large scale,” Parkhill said. “I think Spaceworks represents an important acknowledgement of the city that this is an issue. … The reason we’re doing this is because the market is not creating affordable space for artists now.”