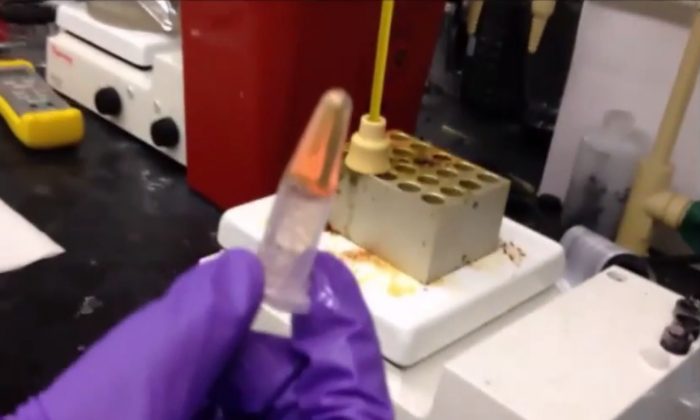 “Take an edible protein and mix it up with edible fatty acid from coconut and warm it up to form a gel,” said C. Vijay Kumar, and you’ve got a “first-of-its-kind” coating for solar cells and light emitting diodes that will boost the power of your solar panels and convert light emitting diodes into ambient white light.

A member of a research team at the University of Connecticut, Kumar announced on Tuesday, Aug. 18, these groundbreaking discoveries during a press conference at the 250th National Meeting & Exposition of the American Chemical Society (ACS) in Boston.

The coating, which boosted the efficiency of a Gratzel solar cell, a low-cost dye sensitized cell, is expected to make costly solar panels more affordable and efficient. But the technology, which is in its infancy, has a long way to go, according to Kumar.

“Most of the light from the sun is emitted over a very broad window of wavelengths,” said Kumar in a press release. “If you want to use solar energy to produce electric current, you want to harvest as much of that spectrum as possible.”

The gel, mixed with four different dye molecules, collects unused blue, green, and yellow photons from a solar cell and discharges them into the red region of the cell’s spectrum. “A large number of solar cells are less sensitive in the blue region and more efficient in the red region,” said Kumar, “By coating a cell, … you can boost the amount of red light the cell receives and therefore we can boost the power output of it.”

Team member Jingwen Ding mixed the gel with only three dye molecules and found that it absorbs the blue light and emits pure white light. Kumar said this process is great for coating light-emitting diodes, which mostly emit in the blue region.

The vision is to integrate the technology into the manufacturing process of solar panels, which cost homeowners thousands of dollars.

At this stage of the University team’s testing, it is difficult to determine how far the technology can go, but Kumar said it is inexpensive to produce. “We start with very inexpensive ingredients, the protein is about 50 cents per gram and fatty acid is a byproduct of coconut oil and also a very inexpensive ingredient,” he explained. “It is very easy to make this stuff—you could make it in your kitchen so that lowers the cost.”

The University of Connecticut team was able to double the power of an inexpensive, low efficient cell with the edible gel technology, but Kumar said, “Those on the other end of the spectrum cannot be boosted as much.”

Silicon solar cells are more commonly used in rooftop solar panels. Now his team is working with a Connecticut company to figure out how to apply the gel to silicon solar cells. Kumar said how long it will take before the technology is incorporated in a manufacturing process depends on investors.