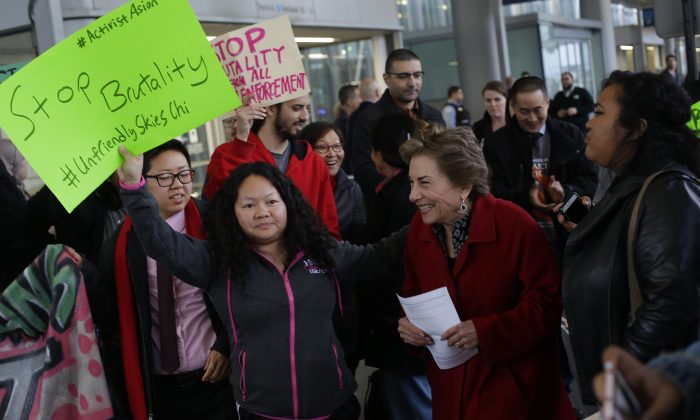 Congresswoman Jan Schakowsky (D-IL) greets protesters against United Airlines at O'Hare International Airport on April 11, 2017 in Chicago, Illinois. The protest was in response to airport police officers physically removing passenger Dr. David Dao from his seat and dragging him off the airplane, after he was requested to give up his seat for United (JOSHUA LOTT/AFP/Getty Images)
Opinion

Respect for others is inseparable from character, which must be the heartbeat of America.

Harmony in society is only possible when character is encouraged, empowered, and enabled.

No one can live completely independent of others.  Society by its very nature demands character.  This virtue is a catalyst for peaceful co-existence with others.

Society benefits only through respectful exchanges with others, and service that develops trust.

Character allows us to be true to the dignity of our existence, and to the tranquility required by society.

When character is deficient, there is chaos, crisis, and confrontation.  Character is essential for society, and it is also the transformational ingredient that will renew integrity.

Character inspires loyalty, trust, and respect.  It enriches relationships, honors the common good, and will change the complexion of America.

Without character, society quickly disintegrates into adversities, divisiveness, and injustices.

As detailed in my extensive published works for the Epoch Times, and a lifetime of presentations and published articles, character must be the heartbeat of America.

Character must be cultivated throughout society, and it must be developed in our youth from the age of reason.

It must be the heartbeat of our educational system, and continue throughout every segment of American life.

It must also be ignited in our families, and in every faith-based community, school, campus, government entity, and corporation.

When character is present, the dignity of the individual as well as the common good is enriched.

Conversely, whenever there is a deficiency of character, the integrity of society is compromised, diminished, and undermined.

The disgraceful dragging of a bloodied doctor off a United flight recently disturbed the soul of America.

Compounding the incident, the initial and superficial legal-posturing of the airlines CEO lacked the moral courage required by the company leader.

Although this customer properly purchased a ticket, and was authorized to board, he was violently removed from the aircraft, to make room for employees needing to travel.

As a response to the video evidence of the incident, the Twitter response of the CEO pathetically read as follows:

“This is an unsettling event to all of us here at United.  I apologize for having to re-accommodate these customers.  Our team is moving with a sense of urgency to work with the authorities and conduct our own detailed review of what happened.  We are also reaching out to the passenger to talk directly to him and further address and resolve the situation.”

Through this contemptuous response, the crisis of the incident was exacerbated by a lack of ethical leadership.

This response failed not only the violated customer, but all others on the flight.  It also wounded the professional hard-working employees of United, the airline industry, corporate America, and the very morale of the nation.

The most basic conflict resolution, diplomacy, problem-solving, and communication skills were non-existent.  There were many failures on many levels and with many people, all of whom should have known better.

It was a complete failure of leadership, professionalism, and moral decency.

This incident and its reprehensible response was an indictment of the character crisis in corporate America.

Only when we ignite character in the heart of corporate America, and throughout every segment of our society, will we be on track for a desperate ethical renaissance.

Humanity has a social nature and each person has a responsibility to contribute to the common good.

This is only possible when we refuse to live as isolated individuals.  We must realize that we are social by nature.   Society is served when character is exemplified within our families, communities, corporations, and government representatives.

Essential to cultivating character in America is ensuring its presence in our corporations.

Every individual in corporate America who has been entrusted with authority has the responsibility to be ethical.  Ethics is inseparable from character and it must be the heartbeat of corporate life.

Character must be the culture of corporate America. It must not be superficially expressed through slogans and mission statements.  It must be alive and present in the corporate culture, experiences, and attitude.

There is a legion of American corporations representing a crisis of character extending far beyond the United scandal.

Some of the worst corporate scandals over the last 15 years include some of the most iconic names in corporate America.

The greed, dishonesty, and arrogance of individuals within these companies violated the most basic ethical principles.

It is time for America to turn the tide from this unethical corporate environment.

Corporate America needs ethical leaders who are fully committed by word and action to cultivating corporations of character.

Moral courage, transformational character, and ethical leadership are critical to the integrity of society.

When virtues are present, both individuals and the common good are the beneficiaries.

The continuous scandals throughout corporate America reflect a crisis of character.

We must reawaken the nation through initiatives that inspire integrity, respect, and courtesy.

We will be on the path of a moral reawakening when character is the heartbeat of corporate America, and cultivated throughout every facet of American life.