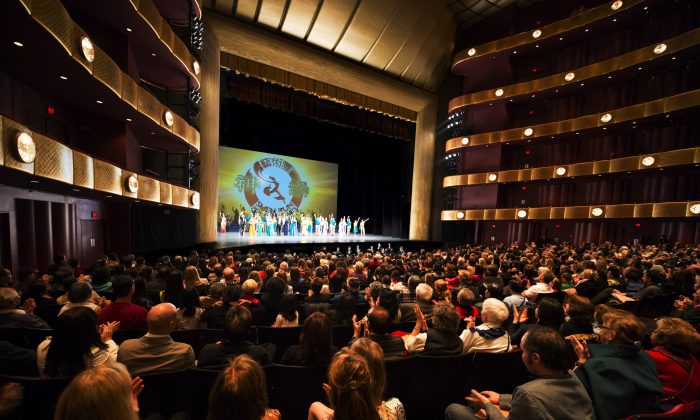 NEW YORK—New York-based Shen Yun Performing Arts once again has audiences raving at Lincoln Center’s David H. Koch Theatre, with a sold out weekend behind it, and seven nearly sold out upcoming shows through Sunday.

“When the curtain opens at the beginning, you hear a sigh of awe throughout the audience,” Jared Madsen, master of ceremonies for Shen Yun, said on Wednesday. “Most people have no idea what they are going to see and they are totally blown away.”

Each year, three Shen Yun Performing Arts companies tour simultaneously around the world, performing at many of the world’s finest theaters.

A nonprofit founded in 2006, Shen Yun’s artistic mission is to revive the true, divinely inspired culture of China. Shen Yun says its artists enjoy artistic freedom in New York that they would not enjoy in China under the communist regime, which has co-opted and destroyed traditional arts.

Shen Yun’s artistic choreography invites theatergoers to experience historical dynasties such as the Tang and Song dynasties, Chinese myths and legends, and famous stories from literature, all the way to the modern day.

Enhancing the dance, vocals, and orchestral music is a vivid state-of-the-art digital backdrop that “extends the stage and transports you to anywhere in China and even to the heavens,” said Madsen.

Despite Shen Yun’s celebration of Chinese historical and cultural traditions, it cannot be shown in China today.

According to Madsen, “These 5,000 years of Chinese culture run counter to the Communist Party beliefs.” The communist regime has systematically suppressed this traditional culture, especially this semi-divine culture, added Madsen.

Madsen always tells this fact to the audience during a performance, and it often elicits surprise, as well as sympathy.

Donna McMaster, a former director of planning at Prada who saw the performance in New York City on April 20, said it was upsetting to learn Shen Yun could not perform in China.

Eileen Flannelly, who attended the same performance, said, “I found that the mere fact that this can’t be seen in China is a pure indication of stifling someone’s beliefs.”

When Shen Yun performed in New York City last year, all seven shows sold out. Tickets to the remaining shows this week are still available, however, they are selling quickly.