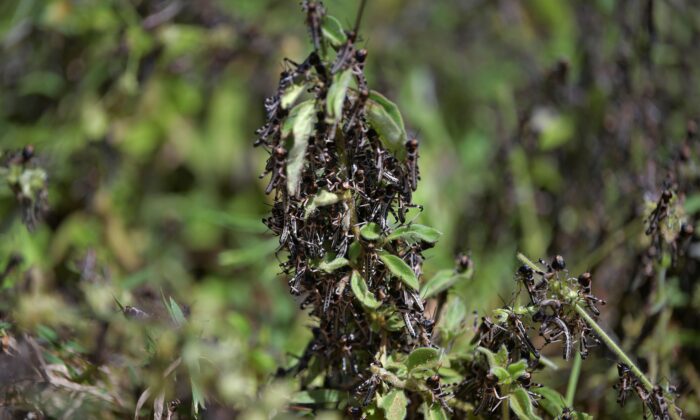 The U.N. has requested more funding to tackle the unprecedented swarms of locusts ravaging crops and grazing land across parts of Africa and Asia.

The U.N.’s Food and Agriculture Organization (FAO) made the funding appeal for an additional $62 million on Tuesday as it warned the East Africa region faces a hunger threat from the invasion of desert locusts that have devastated crops, vegetation, and animal pasture.

Desert locusts can travel up to 150 km (95 miles) in a day and eat their body weight in greenery, meaning a swarm just one-kilometer square can eat as much food as 35,000 people in a day, the U.N. said.

The region is battling the worst outbreak of desert locusts in 70 years as hundreds of millions of the bugs reached Kenya, Somalia, Eritrea and Djibouti, and also spread into Tanzania, Uganda, and South Sudan last week.

The locust upsurge is “a scourge of biblical proportions,” a joint statement from Qu Dongyu, Director-General of the FAO, Mark Lowcock, U.N. Emergency Relief Coordinator; and David Beasley, Executive Director of the World Food Programme said.

“Yet as ancient as this scourge is, its scale today is unprecedented in modern times.”

It also serves as “a graphic and shocking reminder” of the vulnerability of the region, they said.

The FAO launched its first appeal for funding—for $76 million to help control the locust outbreak in January when the insects had affected just three countries. The funding request, however, shot up to $138 million due to the rapid spread and movement of the locust swarms that the U.N. says are affecting more countries daily.

As of Feb. 12, desert locust swarms had been sighted in Djibouti, Eritrea, South Sudan, Uganda, and Tanzania. Currently, there 13 countries, from India to Mauritania in West Africa that are being subject to control operations, reported BBC News.

“These infestations represent a major threat to food security in Kenya and across the entire Horn of Africa, which is already reeling from floods and droughts,” Bukar Tijani, FAO’s Assistant Director-General said last month.

The money would be used to fund activities to combat the locusts before new swarms emerge; help individuals whose crops or pastures are already affected, and protect families and their livelihoods, according to the U.N. Only $52 million has been received or committed so far, the FAO said.

While India is buying drones and specialist equipment to monitor the movement of locusts and spraying insecticides to ward off a new outbreak, China has reportedly deployed an army of at least 100,000 ducks to its western border in preparation for an invasion of the insects.

Qu said the coming few weeks will be critical for tackling the swarms, as experts warned that the number of locusts could multiply 500 times by June if unchecked.

“The math is clear, as is our moral obligation. Pay a little now, or pay a lot more later,” the FAO said.