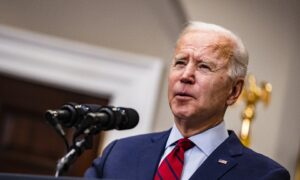 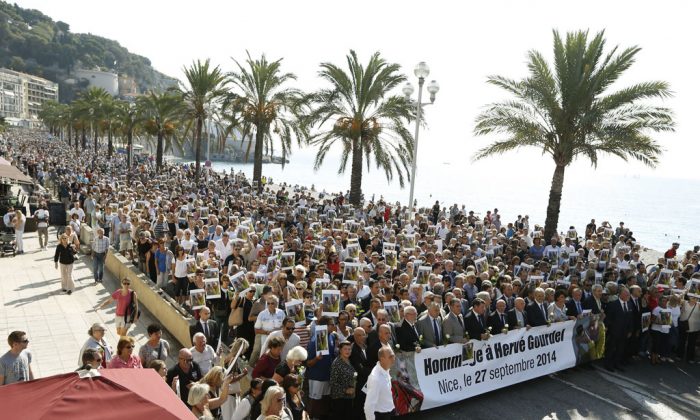 People pay tribute to mountain-guide Herve Gourdel, who was beheaded by Jihadists linked to the Islamic State group in Algeria, during a gathering in Nice, southeastern France, on Sept. 27, 2014. Jund al-Khilifa, or 'Soldiers of the Caliphate,' beheaded the 55-year-old Frenchman after he was abducted on September 21 while hiking in a national park that was once a magnet for tourists but later became a sanctuary for Islamists. (Valery Hache/AFP/Getty Images)
International

UNITED NATIONS—The U.N. human rights chief called Tuesday for a campaign led by Muslims to undermine the ideology of the Islamic State terrorist group, saying this may ultimately be more effective than airstrikes.

Zeid Ra’ad Al Hussein, a Jordanian prince and the first U.N. human rights chief from the Muslim and Arab world, told the U.N. Security Council that by calling for a caliphate, or Islamic state, the group is exploiting “a general yearning” shared by many Muslims the world over.

But he stressed that many Muslims are opposed to the terrorist group for the crimes it has committed in enforcing its ideology, which likely amount to genocide, crimes against humanity and war crimes.

The Islamic State group took control of a large swath of Syria and swept across the border in early June capturing a large swath of northern and western Iraq. A U.S.-led coalition has been carrying out airstrikes against the group in Iraq and Syria but Zeid questioned “whether it is possible to bomb an ideology like this into submission.”

The Islamic State group rejects any individual thought “outside of their closed unyielding logic,” Zeid said, and all dissenters “must be murdered, their memory, culture, every shred of their existence destroyed.”

Zeid said it was disturbing that there have been “few to non-existent” public demonstrations in the Arab and Muslim worlds against the crimes being perpetrated in Iraq by the Islamic State group — which he referred to as “takfiris,” an Arabic term for Islamic radicals — despite condemnations by many Arab and Islamic governments.

He urged much greater global attention to a letter two months ago by 126 prominent Muslim scholars that gives a point-by-point rebuttal to the Islamic State group’s claims, calling its argument “a promising approach.”

The rights chief quoted from the letter including its message to the Islamic State group’s leader Abu Bakr al-Baghdadi: “You have misinterpreted Islam into a religion of harshness, brutality, torture and murder. This is a great wrong and an offense to Islam, to Muslims and to the entire world.”

Nikolay Mladenov, the U.N.’s top envoy in Iraq, said local communities “are beginning to push back” against the Islamic State group whose goal is “to destroy the Iraqi state and replace it with a State of Terror.” He said the process of working with local fighters should go hand-in-hand with retraining and re-equipping the Iraqi army.

U.N. humanitarian chief Valerie Amos told the council that humanitarian conditions in Iraq continue to deteriorate with 5.2 million people in need of assistance and over 2 million displaced from their homes including over 200,000 in the last 10 weeks.

While the Islamic State group is responsible for the majority of atrocities, she said armed groups including militias affiliated with the government “continue to carry out brutal acts of violence against civilians.”