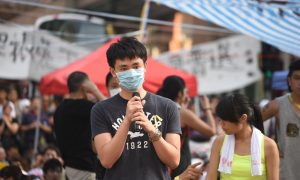 The peaceful pro-democracy movement fighting for universal suffrage from the chief executive in Hong Kong entered the fourth day on Oct. 1. Here are some noteworthy events from the Occupy Central movement, or the Umbrella Revolution as it’s increasingly being called.

As per convention to celebrate Chinese National Day on Oct. 1, the Chinese national flag raising ceremony was hosted at the Golden Bauhinia Square Wednesday at 8 a.m., local time. It’s perhaps the most embarrassing ceremony Chief Executive Leung Chun-ying has ever attended, with over 2,000 Hong Kong protesters calling for his resignation throughout.

Protesters raised their arms and crossed them in front of their heads to express their dissatisfaction to Leung who has so far refused their requests for public communication. Instead, Leung ordered riot police to crackdown on protesters during the first two days of Occupy Central with tear gas and pepper spray.

Heavy police security was arranged at the square, and much of the media coverage focused on the student protesters during the ceremony.

Hong Kong Federation of Students leader Lester Shum told the press on Wednesday that the student protesters would escalate the movement by occupying government agencies if Leung refuses to resign by Thursday.

Shum said, however, the students wouldn’t occupy any buildings that might affect people’s lives such as fire departments or hospitals. He indicated that the student boycott of classes would continue for an indefinite period.

At about 1 a.m. on Oct. 2, around 500 students gathered on Tim Wa Ave., blocking the entrance to the Office of the Chief Executive. Student leader Joshua Wong told press onsite: “I’ve heard that Leung Chun-ying will start working on Friday. But we don’t allow him to work, because we don’t recognize Leung’s regime.”

At least 20 people have been detained by police in different cities in mainland China over the past two days for online posts expressing support for Hong Kong protesters, or for planning to travel to Hong Kong to join the movement, according to Amnesty International on Wednesday. Another 60 people have been summoned by police for supportive online comments.

More and more Hong Kong and Taiwanese celebrities—among them Chow Yun-Fat, Andy Lau, Anthony Wong, and Nick Cheung—have publicly stated their support for Hong Kong protesters over the past two days, with some joining the protest.

Award-winning Hong Kong actor Nick Cheung appeared in central Hong Kong in black shirt on Tuesday, appealing for no more violent suppression of the peaceful students, and he urged the government to respond the people’s requests.

On Wednesday, international film actor Chow Yun-Fat told Apple Daily in Hong Kong: “I saw the citizens and students. They are so brave to fight for their rights. I’m so moved. The police were wrong at the beginning—why did they use tear gas? The students have behaved very rationally … The government can’t avoid [people’s appeal], Leung Chun-ying can’t avoid [people’s appeal].”