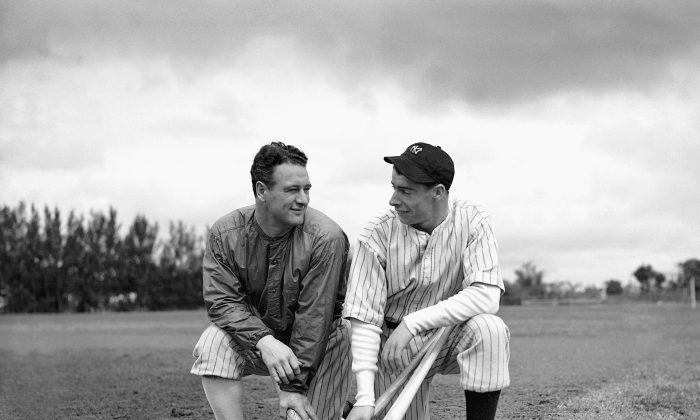 Lou Gehrig (L) gets something like a smile from rookie sensation Joe DiMaggio during spring training in St. Petersburg, Fla., March 8, 1936. DiMaggio, purchased from the San Francisco Seals, had earned a reputation for being shy and reserved since joining the Yankees in Florida. (AP Photo)
12- OBSOLETE

Apparently, even though the Bronx Bombers are out of the post-season this time around, there are enough fans still interested in all things Yankees. So as a result of popular demand—here is the second installment of the brain-teaser called ULTIMATE YANKEE QUIZ.

Incidentally, your loyal scribe is hard at work on what is being billed as “The Ultimate Yankee Book” so if you have questions and answers, stories, sidebars, send them along for the book.

Now—let’s get to the quiz:

22. Who was the last batter Don Larsen faced in the Perfect Game he pitched for the Yankees?

23. What Yankee pitcher had the nickname “Rags”?

24. What position did Wally Pipp play?

A. First Base B. Center Field C. Catcher D. Third Base

25. What is the most games Mariano Rivera saved in a season?

28. What major league team did Joe Girardi manage before the Yankees?

24. A. First Base until Lou Gehrig came along.