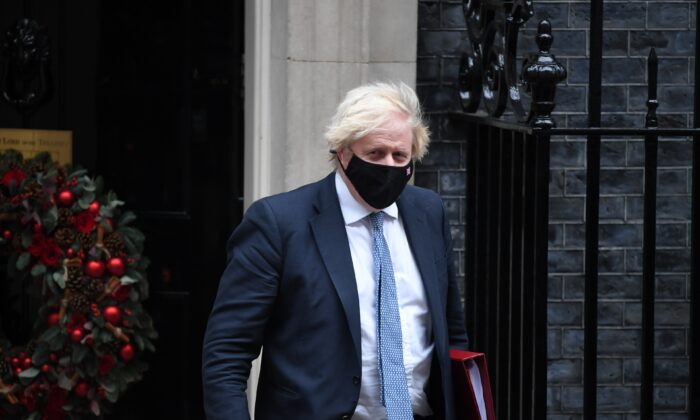 British Prime Minister Boris Johnson has apologised after a video clip emerged apparently showing his aides joking about an alleged Christmas party held in Downing Street last December, when the country was under strict COVID-19 restrictions.

Johnson and other government ministers had repeatedly denied claims, first reported by the Daily Mirror newspaper a week ago, that Downing Street staff held a party on Dec. 18, 2020, in violation of lockdown rules.

But leaked footage obtained by ITV showed former press secretary Allegra Stratton laughing with other Downing Street staffers as she appeared to rehearse answers to questions over a lockdown-busting Christmas party.

At the Prime Minister’s Questions in the House of Commons on Wednesday, Johnson said that he understood and shared “the anger up and down the country” at seeing No. 10 staff “seeming to make light of lockdown measures.”

He said he was also “furious” to see the clip as he could understand “how infuriating it must be to think that people who have been setting the rules have not been following the rules.”

“I apologise unreservedly for the offence that it has caused up and down the country and I apologise for the impression that it gives,” he said.

But Johnson emphasised that he had been “repeatedly assured” that “there was no party and that no COVID rules were broken.”

He said he had ordered Cabinet Secretary Simon Case to conduct an internal investigation into the allegations, adding, “It goes without saying that if those rules were broken, then there will be disciplinary action for all those involved.”

Labour leader Keir Starmer said: “Millions of people now think the prime minister was taking them for fools, that they were lied to.” He said Johnson has been “caught red-handed” and his credibility in enforcing COVID-19 rules had been damaged.

The Scottish National Party went further and demanded the prime minister’s resignation. Ian Blackford, the party’s Westminster leader, said: “Downing Street wilfully broke the rules and mocked the sacrifices we have all made, shattering the public trust. The prime minister is responsible for losing the trust of the people. He can no longer lead on the most pressing issue facing these islands.”

Johnson replied by accusing opposition parties of playing politics and insisted he was “going to get on with the job.”

Sir Charles Walker, a former vice chairman of the 1922 Committee of backbench Tory MPs, said the government is likely to now find it “almost impossible” to introduce CCP (Chinese Communist Party) virus restrictions as a result of the ongoing saga.

He told Times Radio: “I think now that, going forward, any measures will be advisory. I think it would be very difficult to enshrine them in law and then once again ask our poor police forces to enforce them.”