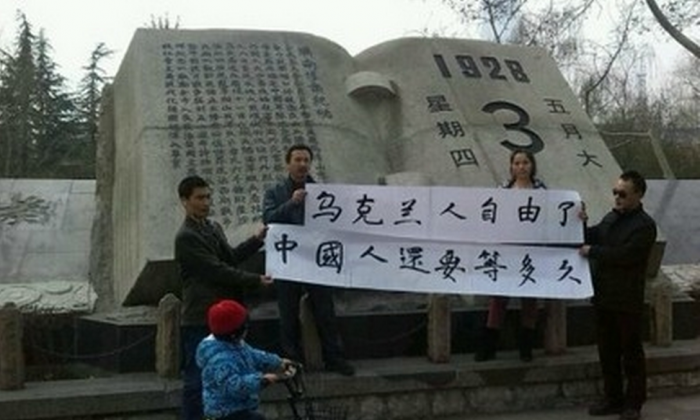 Four people hold banners saying, “Ukrainian people are free now. How long do Chinese people have to wait?” in China, February 2014. The downfall of the Ukrainian government came as happy news to many Chinese. (Weibo.com)
China

Three months of civic upheaval in Ukraine led to a victory for the people of the country, with President Viktor Yanukovych being driven from Kyiv on Feb. 22, and now wanted by police for mass murder.

The turn of events attracted enthusiastic discussion by Chinese Internet users who were excited about the prospect—however remote it currently seems— of the Chinese Communist Party also collapsing.

Some Chinese even went from the computer to the streets, holding banners in public saying: “Ukrainian people are free now. How long do Chinese people have to wait?”

Many of the comments supporting a Ukraine-style toppling of the regime in China were only available temporarily: the Communist Party’s Internet monitors were quick to delete them from major websites and social media platforms in China.

Chinese said they were particularly inspired by the photographs online of Ukrainian people ripping down statues of Vladimir Lenin, the former dictator of the Soviet Union. A large portrait of Mao Zedong still hangs in Tiananmen Square in Beijing, and the violent legacy of communism in China is regularly suppressed by the Party.

“The reason that Ukraine had setbacks during the process of democracy and constitution-building is because it didn’t ban communism and the Communist Party,” said Ye Gongmo, a Chinese entrepreneur.

Like many who shared their views about Ukraine, he wrote on Sina Weibo, a Twitter-like platform in China that has come under increasing pressure by the authorities recently.

“By tearing down statues of Lenin, it means Ukraine is cleaning up the leftover dirt of communism, and welcoming a real constitution,” Ye wrote.

A Focus on Turmoil

China Central Television, the official broadcast mouthpiece of the Chinese communist Party, gave intensive coverage to events in Ukraine—but their perspective was different to that of the restive Internet users.

The basic message of CCTV’s coverage was simple: protesting against the government brings chaos.

That changed on Feb. 22, however, when Yanukovych fled the city. Coverage was abruptly stopped.

“CCTV’s extensive reports on fires, violent protests, and turmoil in Ukraine made my life feel like it was sweeter than honey,” said Gao Jian, a Chinese lawyer. “But suddenly there was no news on Ukraine any more” after Yanukovych fled, he added.

After the official media channels discovered that the people won, the military revolted, and the president escape, “CCTV switched to focusing on the revival of Japanese militarism.”

Xiao Li, an Internet user, complained that the official media never reported on why the people revolted against the government. “They don’t dare tell how Ukrainian people hated the corruption of the government.”

The former Ukrainian government’s violent suppression of protesters called to mind for many in China the Communist Party’s own crushing of the democracy movement in China in 1989, when tanks and machine guns were used to kill unarmed protesters.

“The outcomes are so different,” lamented some netizens.

Some pointed out that Yanukovych ordered a suppression that led to the deaths of 82 protesters, and now has a warrant out against him. The Chinese military, on the other hand, killed between hundreds and thousands, and activities memorializing their deaths are banned and interrupted in China.