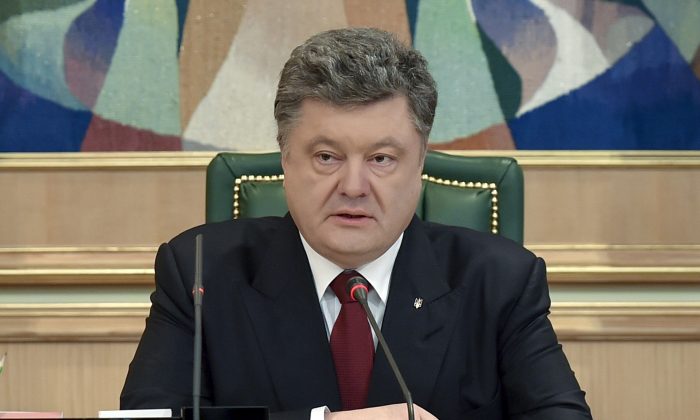 Ukraine's President Petro Poroshenko speaks to official in his office in Kiev, Ukraine, Monday, April 6, 2015. Poroshenko on Monday April 6, 2015, publicly lifted his objections to a referendum that could give more powers to the restive regions engulfed in more than a year of warfare, reversing his government’s previous position. (AP Photo/Mykola Lazarenko, Pool)
Europe

KIEV, Ukraine— Ukrainian President Petro Poroshenko has warned of a possible large-scale offensive by separatist forces in the east, one day after a major battle erupted on the western edge of the main separatist rebel stronghold.

Hostilities on Wednesday left more than a dozen dead and brought a February cease-fire agreement between Russia-backed rebels and government troops to breaking point.

In his annual address at Parliament on Thursday, Poroshenko spoke of a “colossal threat of the resumption of large-scale hostilities by Russian and terrorist forces” and said there are 9,000 Russian troops in the rebel-controlled area right now.

Russia has strongly denied supplying the rebels either with weapons or with recruits, despite mounting evidence suggesting otherwise.