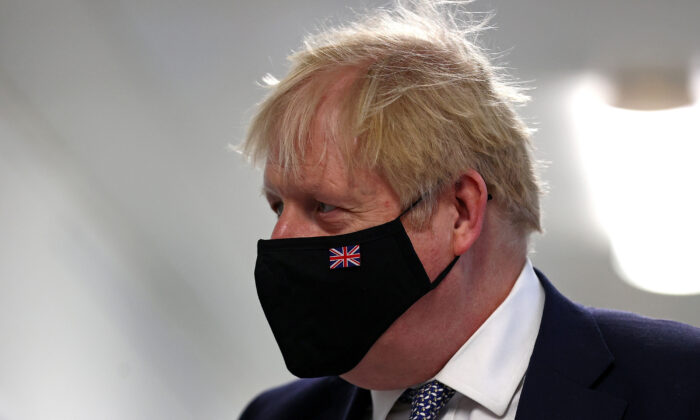 Ukraine Will Become the ‘New Chechnya’ If Invaded by Russia: Boris Johnson

The UK’s Prime Minister Boris Johnson warned that an invasion of Ukraine will be a prolonged “painful, violent, and bloody business” for Russia.

Johnson said people in Russia “need to understand that [Ukraine] could be their new Chechnya”—a Northern Caucasus nation that was in conflicts with Russia for more than 26 years.

The UK on Monday said it has begun withdrawing some embassy staff and dependents from Kyiv, while the EU’s High Representative Josep Borrell said it doesn’t plan to “do the same thing because we don’t know any specific reasons.”

Asked what the UK knew that the EU didn’t, Johnson told reporters that a Russian plan “for a lightning war that could take out Kyiv is one that everybody can see,” as “very clear” intelligence showed that “there are 60 Russian battle groups on the borders of Ukraine.”

But Johnson added he didn’t think the predicted invasion is “by any means inevitable” despite the “pretty gloomy” intelligence, and that the West needs to clearly warn the Kremlin that it “would be a disastrous step.”

“The UK is leading on creating the package of economic sanctions, working with our partners around the world,” Johnson said, adding that he’s due to speak to Washington and his counterparts from other countries on Monday evening.

“But we also need to get over the message that invading Ukraine, from a Russian perspective, is going to be a painful, violent, and bloody business. And I think it’s very important that people in Russia understand that this could be a new Chechnya.”

Johnson said he had been to Ukraine several times and believes the Ukrainians “will fight.”

The prime minister said the UK is also “helping to stiffen the resistance of our Ukrainian friends” including supplying defensive weaponry and expressing support for “the people … and … the sovereign integrity of Ukraine.”

“Any invasion, any incursion of any kind, of any dimension into Ukraine is not going to be a cost-free business,” Johnson stressed, in an apparent damage control effort over U.S. President Joe Biden’s “minor incursion” comment.

“There will be casualties. And I think that people in Russia need to understand that it could be their new Chechnya,” he said.

The UK and Australia said on Monday that they have begun withdrawing some embassy personnel from Ukraine, while Germany offered assistance to staff members’ families and some civilians who want to leave.

The U.S. State Department ordered family members of U.S. government employees at its embassy in Kyiv to leave the Ukrainian capital and authorized the voluntary departure of non-essential civil servants on Sunday night.

Countries have also issued travel warnings to the Eastern European country over the risk of armed conflict.