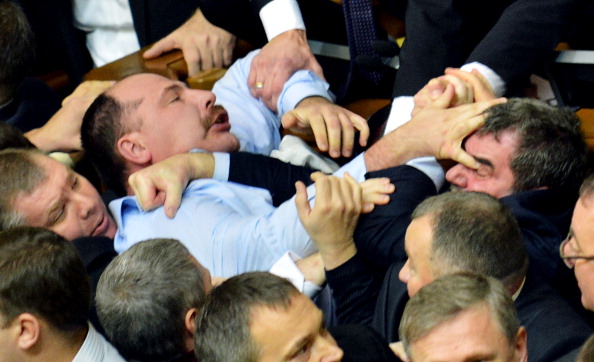 The majority of Parliament members were involved in the fight, but former heavyweight boxing champion Vitaly Klitschko, who heads the anti-corruption UDAR party—perhaps wisely—did not get involved in the melee, reported the Kyiv Post.

The fight broke out after opposition lawmakers tried to physically prevent a vote to choose the new speaker. In October’s disputed elections, Yanukovych’s Party of the Regions received 250 seats, more than enough to secure a majority in the legislative body.

“I understand that many people want Klitschko to launch an offensive but I would like to remind [them] that, for example, in the United States a boxer’s fists are considered weapons and the fists of a world champion are considered nuclear weapons,” Klitschko said, according to USA Today, which cited local media. “We will not use these weapons for now.”

According to CNN, one parliamentarian’s ear was torn, while others were thrown out of the session. Members of the Svoboda Party broke down the doors and the metal detector to allow members inside.

“We knocked and knocked,” Svoboda Party MP Yuriy Syrotyuk was quoted as saying. “The question is, who locked the doors for the members of parliament?”

Some MPs also walked on tables and there were reports that they stomped on others’ heads. According to Ukraine law, parliamentarians cannot be punished for the brawl and police cannot intervene.

On Thursday, the European Parliament slammed Ukraine over its recent elections, saying they “failed to bring” the country closer to joining the European Union.

“Though the association agenda with Ukraine is still on, the country must prove its commitment to genuine democracy before an agreement can be signed,” the European Parliament said in a statement.

It said there are still problems in the country in regards to respecting “democratic principles, rule of law, independence of the judiciary, and media freedom.”

The elections in late October were harshly criticized by nongovernmental organizations that monitored them, including the United Nations-affiliated Organization for Security and Cooperation in Europe. They cited a lack of overall transparency, biased media coverage, and improper use of state resources by the ruling Regions party.