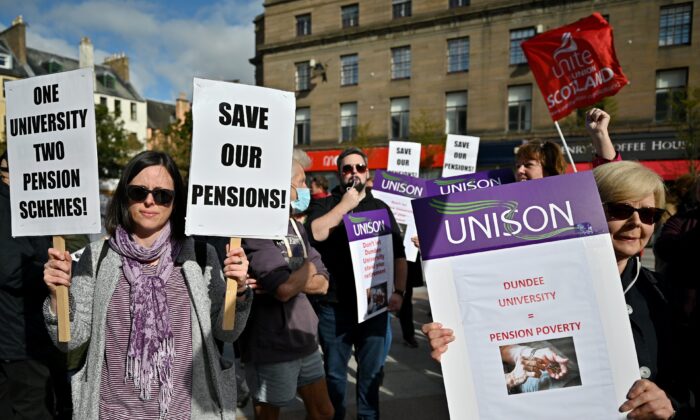 Staff from Dundee University hold a rally in City Square in Dundee, Scotland, on the first day of a five-day strike on Sept. 29, 2021. (Jeff J Mitchell/Getty Images)
UK

British university academics and staff members are being balloted for strike over pay, pensions, and working conditions, which union leaders say would cause “enormous disruption.”

Members of the University and College Union (UCU) will vote in the next few weeks on whether to go on strike, causing concerns that students’ learning would be impacted again just as face-to-face teaching resumed after the disruption caused by the COVID-19 pandemic, which was caused by the CCP (Chinese Communist Party) virus.

The union says it is fighting cuts to Universities Superannuation Scheme (USS) pensions, declining pay, the use of insecure contracts, unsafe workloads, and “serious” equality failings.

The UCU is calling for a £2,500 ($3,435) pay increase, an end to alleged race, gender, and disability pay differences, a framework to eliminate zero-hours contracts, and action to tackle “unmanageable workloads.”

She said that university staff had suffered from “massive cuts to their pensions, collapsing pay, and the rampant use of insecure contracts.”

“The university sector is worth tens of billions of pounds, but the uncomfortable truth is that this success is built on exploitation, with staff denied dignity in work and in retirement by vice-chancellors on eye-watering salaries,” she wrote.

She warned strikes would cause “enormous disruption.”

UUK said it was “disappointed” that the union is pressing ahead with a strike ballot, adding that its proposed reforms will secure the status of the USS as “one of the most attractive pension schemes in the country.”

A UUK spokesperson said employers met with UCU representatives last Tuesday and further meetings are planned for the coming weeks.

“After a difficult 18 months, students do not deserve any further disruption,” said the spokesperson. “It is unclear why UCU thinks it’s appropriate for students to suffer due to the scheme’s increased costs and the regulatory constraints under which pensions operate in the UK.”

UCEA Chief Executive Raj Jethwa said, “We are disappointed that UCU is encouraging its members to ballot for action which is specifically designed to disrupt teaching and learning for students who have endured so many recent upheavals.”

He said, “The lengthy delay for a ballot and strike action over the past months has clearly targeted the autumn term and our students, just when we are finally back on campus.”