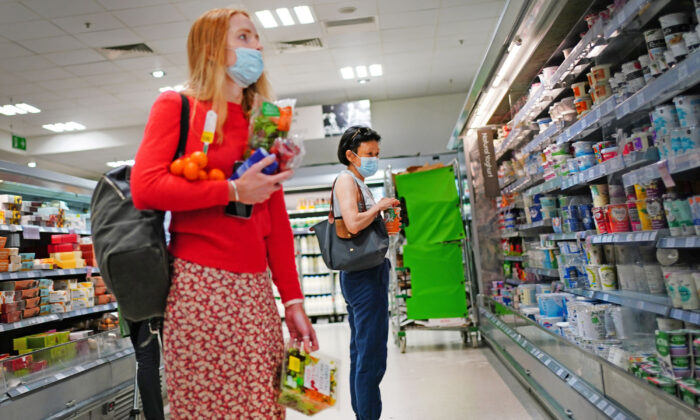 Undated photo of shoppings in a supermarket. (Victoria Jones/PA)
UK

Shoppers continued to shun the high street with sales volumes falling for the fifth consecutive month—the longest continuous stretch on record, according to official statistics.

The drop was due to a fall in sales volumes in non-food stores, with lighting and furniture businesses the hardest hit, the Office for National Statistics (ONS) said.

Sales volumes in September were down 0.2 percent, following a 0.6 percent fall in August, although they remain 4.2 percent above pre-pandemic levels in February 2020.

Food sales volumes were also up by 0.6 percent, the ONS added, and remain 3.9 percent above pre-COVID levels.

But while shoppers opted to avoid high streets, sales online continued to rise and now account for 28.1 percent of all spending—up from 27.9 percent in August.

There was a particular surge in department store sales online, up by 3.8 percent, meaning nearly 10 p ($0.13) in every £1 ($1.38) spent online goes to the likes of John Lewis, Debenhams, or House of Fraser, the ONS said.

Darren Morgan, ONS director of economic statistics, said, “Household goods were the main driver of this month’s decline, with a fall of nearly 10 percent, while food sales ticked back up after falling last month.

“Petrol sales exceeded their pre-pandemic level for the first time, with filling stations reporting very strong sales during the last week of September.

“Despite the lifting of restrictions, in-store retail sales remain subdued, with many consumers still opting to shop online.”

Retail chiefs laid the blame at the doorstep of the government and urged ministers to find ways to reduce the issues with supply chains and high energy costs.

Helen Dickinson, chief executive of the British Retail Consortium, said, “Retailers will be concerned by the slump in sales, just as they begin their preparations for the all-important Christmas period.

She added: “For the sake of the UK’s economic recovery, it is vital that retail sales bounce back as we near the festive season.

“Labour shortages across the supply chains, on farms, factories, warehouses, and lorry drivers, all threaten to derail this recovery and it is vital that government finds a long-term solution to this problem.”

Looking forward, commentators said the rest of the year could see traditional festive shopping patterns shift as a result of the problems.

Silvia Rindone, EY UK and Ireland retail expert, said: “Over recent years, shoppers have tended to wait until late December to buy for Christmas in the hope of bagging some great bargains.

“However this year, with news of supply chain disruption and supply concerns for key products, shoppers are likely to pull forward their non-perishable Christmas spending into October and November to make sure they get what they want.”