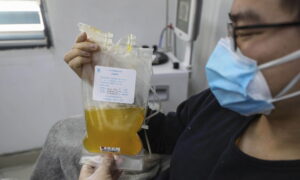 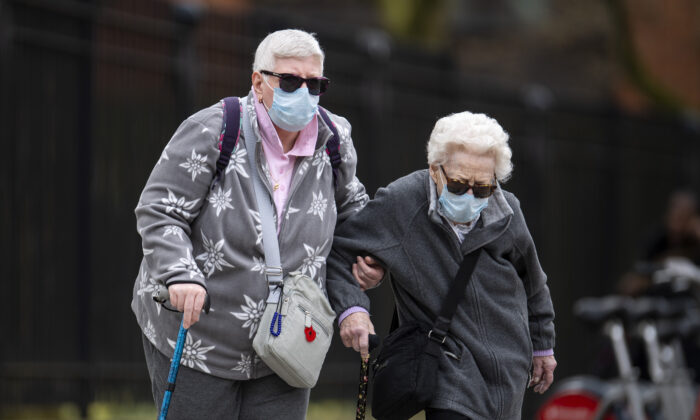 Elderly people wear protective masks as they walk down a street in London, England, on April 1, 2020 (Justin Setterfield/Getty Images)
WORLD

The CCP (Communist Chinese Party) virus, commonly known as the novel coronavirus, causes a disease called COVID-19, which can prove deadly for a small percentage of patients, particularly for the elderly and those with underlying health conditions.

UK authorities have reported a rapid increase in the number of deaths from the new illness. A day before the 563 deaths were reported, authorities said 381 people died overnight.

The figures don’t include deaths outside hospitals, such as those in care homes.

British people are under lockdown, only allowed to outside for food, health reasons, or work if they cannot work from home and are a key worker.

Some 153,000 people have been tested across the UK, of which 29,474 have tested positive, the Department of Health and Social Care said on Wednesday.

Pauline Philip, national director of Emergency and Elective Care for NHS England and NHS Improvement, and hospital chief executive Sarah-Jane Marsh, instructed clinicians in a letter on April 1 to make sure any laboratories are being fully used.

“Given the lead time between swabbing and lab testing, it is vital that sufficient numbers of staff/index cases are swabbed today and each successive day to fill the next day’s lab testing capacity,” they wrote, underlining the word “today.”

Spare tests from within organizations or obtained from neighboring acute and ambulance trusts could be used to boost testing, they added.

Testing is part of the strategy deployed by the government that’s aimed at slowing the spread of the virus so fewer people need hospital treatment at any one time, preventing the overload of hospitals, Foreign Secretary Dominic Raab said at a press conference on Tuesday night.

Professor Stephen Powis, national medical director for NHS England and NHS Improvement, said on Tuesday that the number of infections wasn’t rising as rapidly as it once was but added: “We must not be complacent and take our foot off the pedal.”

Prince Charles, who contracted the CCP virus but later recovered, said in a video released Wednesday that he and his wife are thinking of those who have lost loved ones as well as those who have become ill.

“We also know that in every community up and down this land—where people of all ages are being affected by this virus—there are truly wonderful neighbors, individuals and groups of volunteers who are providing ceaseless care and attention to those most at risk and that all this network of selfless assistance is, in itself, helping to provide vital support and reassurance to the hard-pressed professional services,” he said, also praising “doctors, nurses, and all the vital ancillary staff that form the backbone of our remarkable NHS.”

UK residents have been told to only leave the house for limited purposes, such as shopping for basic necessities, getting exercise, obtaining any medical need, and traveling for work. Anyone who goes out should stay at least six feet from other people at all times.

They’ve also been asked to wash hands with soap and water often for at least 20 seconds, cover their mouth and nose with a tissue or sleeve when coughing or sneezing, and avoid touching their eyes, nose, or mouth with unclean hands.

Researchers, meanwhile, recommended this week that Britain develop a contact-tracing application that could be used to immediately notify contacts of positive cases.

“By targeting recommendations to only those at risk, epidemics could be contained without need for mass quarantines (‘lock-downs’) that are harmful to society,” they wrote in a study published in Science Magazine.