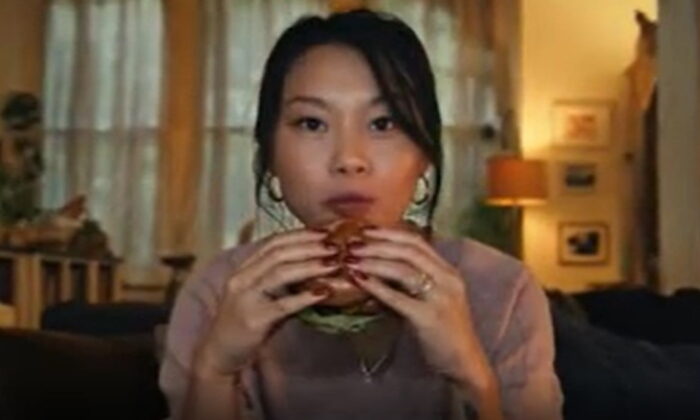 A screenshot of Tesco’s advert featuring its Plant Chef range, which has been deemed to be misleading. (PA Media)
UK

Britain’s advertising regulator has banned ads for Tesco’s Plant Chef burgers over “misleading” claims that the products could make a positive difference to the environment compared with their meat equivalents.

The Advertising Standards Authority (ASA) ruled on June 8 that the supermarket chain does not hold any evidence to support the environmental claims made in the ads, which were broadcast on TV and radio and also disseminated in the press and online in October and November.

The TV ad featured a woman about to eat a burger while watching television. The programme she was watching said, “The planet is continuing to warm.”

Then the voice-over said, “Now that’s not what Zoe likes to hear, but she’s gonna roll up her sleeves and do her bit.

“And there it is—a delicious Tesco Plant Chef burger. We’ve lowered the price of dozens of our Plant Chef products because a little swap can make a difference to the planet.”

The radio, newspaper, and online versions of the ad carried similar messages making the same claims about the burgers’ alleged environmental benefits.

The ads attracted 171 complaints that the claims around swapping products were misleading.

In its ruling, the ASA said: “Because we considered the ads implied that switching to products in the Plant Chef range would positively affect the environment, we expected to see evidence that that was the case based on the full life cycle of the Plant Chef burger in comparison with a meat burger.

“However, we understood that Tesco did not hold any evidence in relation to the full lifecycle of any of the products in the Plant Chef range, or of the burger featured in the ads. We were therefore unable to assess the product’s total environment impact over its life cycle compared with that of a meat burger.”

Because of the absence of evidence, the ASA concluded, “the claims regarding their positive benefits to the planet had not been substantiated and were likely to mislead.”

A Tesco spokesman said, “We offer hundreds of plant-based options and while we are disappointed by this outcome, our customers can continue to count on us to help them enjoy a better balanced diet with plenty more delicious and affordable plant-based products in the pipeline.”

Also on June 8, the ASA banned a TV ad for the organisation Vegan Friendly UK after it drew complaints about its graphic images of animals in distress alongside people eating.

The ad, seen in March, showed two women and one man eating around a table as well as clips of a fish head which was still gasping for air, a live piglet alongside a pig with its eyes closed and a cow’s face which appeared to have tears coming from its eye.

A further clip showed a cow’s skinned head with its eyes and teeth still present lying on its side.

As those at the table continued to eat, text stated: “No animal was harmed, consumed, or purchased to make this advert,” followed by the text: “Make the connection.”

The ASA received 63 complaints, including that the ad contained gratuitous violence towards animals, which caused unnecessary distress to viewers.

The regulator concluded that the ad was “likely to cause distress to both younger and adult audiences and therefore was not suitable for broadcast on TV regardless of scheduling restrictions.”