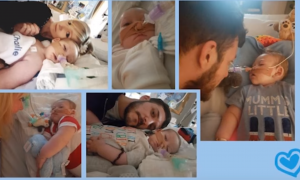 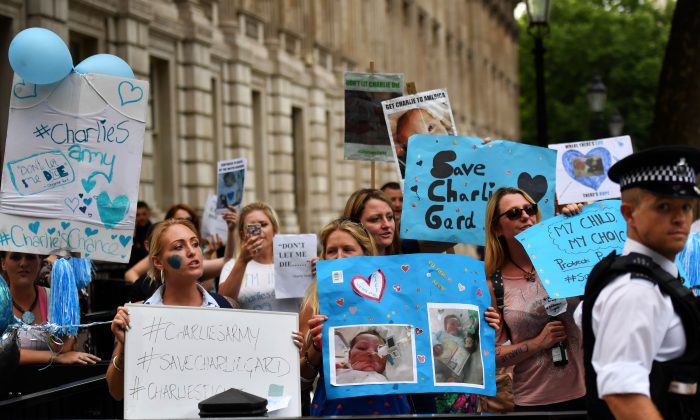 U.K. Prime Minister Theresa May told the House of Commons that she was confident that doctors at the Great Ormond Street Hospital would consider any “offers or new information that has come forward with consideration of the well-being of a desperate ill child.”

Her remarks could equally be interpreted as a carefully balanced neutral statement, which actually supports both sides of the debate.

Eleven-month-old Charlie Gard has a terminal illness. His parents want to take the child to the United States for an experimental treatment that might add a short time to their child’s life.

Doctors at the Great Ormond Street Hospital have determined that keeping the child alive artificially will only increase his suffering.

British and European Union courts have ruled in support of the doctors.

Much of the rest of the world have been siding with the parents.

The Vatican has offered to treat the child at Bambino Gesu Hospital in Rome.

An as-yet unnamed U.S. hospital has offered to treat Charlie for free.

President Trump weighed in via Twitter, tweeting, “If we can help little #CharlieGard, as per our friends in the U.K. and the Pope, we would be delighted to do so.”

U.S. entertainer Cher also expressed her support, tweeting, “Institutions have no right 2flip switch on beloved. If can save precious Charlie Gard…send him 2 us‼ We lift our…door.”

U.K. Foreign Minister Boris Johnson expressed the opposing view. He released a statement saying it was best if “decisions continued to be led by expert medical opinion, supported by the courts, in line with Charlie’s best interests.”

Unless there is a major change in the legal and political situation, Charlie Gard’s life support will be turned off in a few days and the child will die.

Charlie Gard is stricken with an incurable illness that keeps his brain and muscles from generating energy. On top of that he is severely epileptic and has congenital deafness.

Charlie’s main problem is infantile-onset encephalomyopathic mitochondrial DNA depletion syndrome. This is the illness that renders him unable to breathe and has caused severe brain damage. He cannot survive without a respirator and cannot eat.

The experimental treatment being offered in the United States would not be able to cure or reverse the effects of the disease. At best, Charlie might not deteriorate as quickly.

Life at All Costs?

Various EU courts have ruled that since the child will never improve, and will only deteriorate, there is nothing to be gained for the child by keeping him alive artificially.

With a respirator taped to his face and feeding tubes in his nostrils supplying nutrients, Charlie Gard does not have a pleasant existence.

The rulings of the U.K. Supreme Court and the EU European Court of Human Rights are not as cold and inhumane as they seem by comparison to the opposing sentiments.

They also realize that Charlie’s departure is inevitable, and that if Charlie can feel anything at all, he is likely feeling pain and discomfort. Prolonging the pain of the child does not ease the suffering of the parents.

In its judgment the EUCHR said:

“The domestic courts had concluded, on the basis of extensive, high-quality expert evidence, that it was most likely Charlie was being exposed to continued pain, suffering, and distress and that undergoing experimental treatment with no prospects of success would offer no benefit, and continue to cause him significant harm.”

This is not wildly dissimilar from a statement from Archbishop Vincenzo Paglia, president of the Pontifical Academy for Life.

Archbishop Paglia said the interests of the patient must be paramount, but “We must also accept the limits of medicine and […] avoid aggressive medical procedures that are disproportionate to any expected results or excessively burdensome to the patient or the family.”

Most people cannot take a dispassionate view when looking at poor Charlie lying in his bed. They respond as parents; they respond as emotional beings. They recognize the pain of parents watching a child suffer and also the pain of fearing the loss of that child.

Various tweets have called the judges “evil” and called their actions shameful.

One tweet read “The #CharlieGard case is terrible. Shame on the UK judges allowing him to die, shameful, terrible decision.”

Another said, “Very evil people … Sentencing a child to death! What an anti-child pagan society we are. I pray for #CharlieGard!'”

People have been backing their emotions with actions. Crowdfunding efforts have raised at least $1.68 million for the parents to defray medical and travel expenses.

In a final appeal to let Charlie live, supporters in England have organized a march on Number 10 Downing Street, the official residence of Prime Minister Theresa May.

The march, called the Show of Support (SOS) For Charlie Gard, started at 6 p.m. London time.