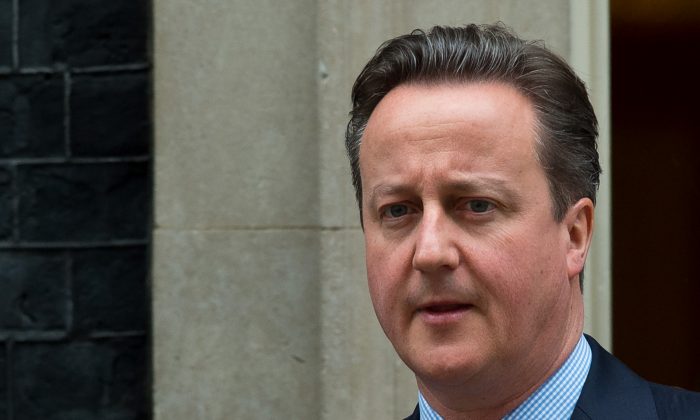 After David Cameron’s father was named as a client of Mossack Fonseca in the Panama Papers, the British prime minister admitted on April 7 that he profited from offshore holdings.

In an interview with ITV news, Cameron said he and his wife, Samantha, sold shares totaling 31,500 pounds (currently $44,300) in an offshore company named Blairmore Holdings in January 2010, just five months before becoming prime minister. They had paid 12,497 pounds for the shares in 1997. The prime minister said the money was subject to British taxation in the “normal ways.”

Cameron said he sold his shares before taking office because he did not want to be accused of having ‘vested interests.’

His acknowledgement comes after 11.5 million documents from the Mossack Fonseca were released by International Consortium of Investigative Journalists and other news organizations. The data breach named 12 world leaders and 140 other politicians in connection to offshore companies in 21 tax havens. The names included Vladimir Putin, Argentine president Mauricio Macri, and the Prime Minister of Iceland.

Cameron said he sold his shares before taking office because he did not want to be accused of having “vested interests.”

David Cameron says he did have a stake in his father’s offshore trusthttps://t.co/4AgfKASZJA #PanamaPapers https://t.co/kCcKZjSSYc

However, his father, Ian Cameron, put money into Blairmore Holdings, which did not pay British tax.

Although the actions may not be illegal, many have called for the prime minister to be transparent about his finances. Cameron had advocated before about financial transparency in his country and abroad. He is also scheduled to host an international anti-corruption summit in London next month.

“No shares, no offshore funds”: Here’s what @David_Cameron said on Tuesday when @faisalislam asked him about #tax https://t.co/AQ3UoHpKho

The prime minister had been avoiding questions about his finances since the data leak. When asked if the Cameron family still held an offshore fund, a spokeswoman told The Guardian, “That is a private matter. I will focus on what the government is doing.”

A few days later, Cameron said his father’s name was being “dragged through the mud.” He insisted that his father, who died in 2010, did not set up an offshore fund set up to avoid paying tax.

“I want to be as clear as I can about the past, about the present, about the future, because frankly, I don’t have anything to hide,” said the prime minister.

After his revelation, the hashtag #ResignCameron took over Twitter, with over 83,000 tweets by the next morning.

She sells seashells on the seashore… No, that’s not it! It’s… He sells his shares on the offshore… That’s more like it. #resigncameron

When it comes to offshore tax avoidance all you had to do was ask the same question in 7 different ways to get the truth.#resigncameron

I couldn’t agree more. Come out and protest on Saturday. Cameron should resign. https://t.co/B8GtCdFc7P