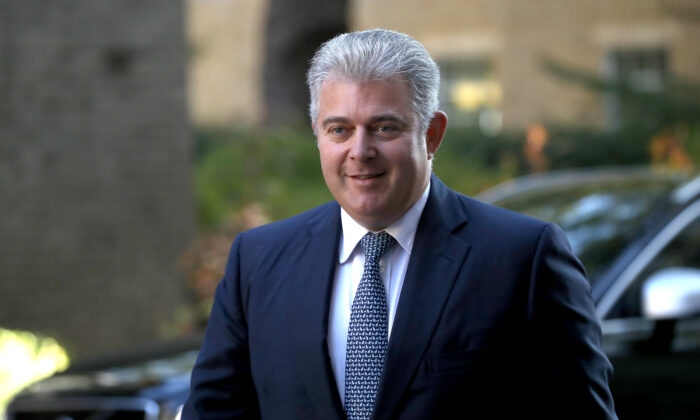 A British government minister has been criticised for suggesting that Prime Minister Boris Johnson being fined for attending lockdown-breaching parties in Downing Street was akin to former ministers receiving speeding tickets.

Johnson, his wife Carrie, and Chancellor Rishi Sunak were issued “fixed penalty notices” by the Metropolitan Police last week for attending a birthday gathering for the prime minister in Number 10 Downing Street in June 2020, in violation of lockdown restrictions during the CCP (Chinese Communist Party) virus pandemic.

Both Johnson and Sunak have paid the fines, apologised for breaking COVID-19 laws, but have rejected opposition parties’ calls for them to resign.

Trying to defend the prime minister, Brandon Lewis, the secretary for Northern Ireland affairs, said on April 19 that other ministers, including former Prime Minister Tony Blair, had been fined by police but remained in office.

Lewis told Sky News: “Whether it is through parking fines or speeding fines, ministers of both parties over the years have been in that position. We’ve had prime ministers in the past who have received penalty notices, from what I can see, and also front bench ministers.

“I saw there was a parking notice that Tony Blair had once. We’ve seen front bench Labour ministers and, let’s be frank, government ministers as well.”

Lewis’s remarks attracted criticism from opposition parties. Liberal Democrat leader Ed Davey said ministers’ excuses for the so-called “partygate” scandal were getting more pathetic by the day and called them an “insult to bereaved families.”

Keir Starmer, leader of the main opposition Labour Party, said there has been a “pathetic display of Tory MPs going out to defend the indefensible” and it is “something they all ought to be ashamed of.”

Lewis tried to distance himself from his own remarks, telling the BBC that he was “not in any way trying to equate a speeding ticket with the sacrifices people have made through COVID.”

Sir Lindsay Hoyle, the Speaker of the House of Commons, ruled on April 19 that MPs will get the chance to vote on whether Johnson misled Parliament when he repeatedly told MPs COVID-19 rules were followed in Downing Street.

Hoyle said he had approved an application from Starmer and other opposition MPs allowing them to put forward a motion for debate on April 21.