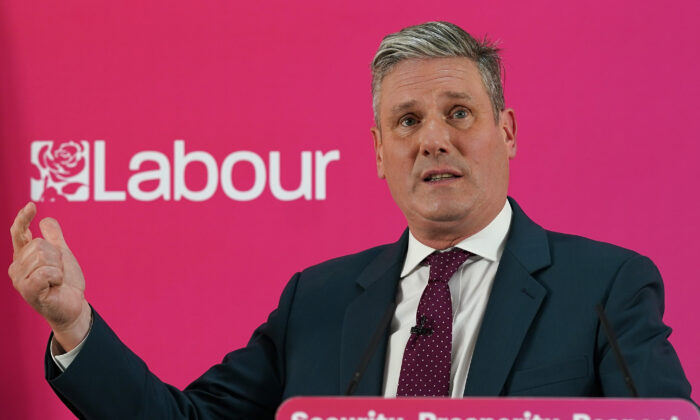 Labour leader Keir Starmer gestures as he delivers a speech outlining his party's plan to fight the next election at Sage Gateshead, in Gateshead, England, on July 11, 2022. (Ian Forsyth/Getty Images)
UK

UK Labour Party leader Sir Keir Starmer has been found to have breached the MPs’ code of conduct eight times, but the violations have been judged to be “minor” and “inadvertent.”

An inquiry conducted by the Parliamentary Standards Commissioner Kathryn Stone found that the opposition leader failed to register on time eight interests, including gifts from football teams and the sale of a plot of land.

When the inquiry was opened in June, Starmer said he was “absolutely confident” he had not broken the MPs’ code of conduct.

But the commissioner has now found that the Labour leader did breach the code in eight instances through late declaration of earnings and gifts from UK sources.

However, she noted the “breaches were minor and/or inadvertent, and that there was no deliberate attempt to mislead.”

The commissioner decided the inquiry could be concluded by way of the “rectification” procedure, without a referral to the Committee on Standards of the House of Commons, which happens in the more serious cases.

The rectification procedure entails publishing the details and an apology on the House of Commons website.

A Labour Party spokesperson said: “Keir Starmer takes his responsibilities to the Register very seriously and has apologised to the Commissioner for this inadvertent error.

“He has assured the Commissioner that his office processes have been reviewed to ensure this doesn’t happen again.”

In a letter to the commissioner dated June 21, Starmer said the late declarations were “a result of an administrative error within my office,” adding: “I take full responsibility for my register, and I apologise.”

The inquiry was opened after the commissioner received a complaint alleging that Starmer had failed on three occasions between March and May to register income and hospitality that he had accepted, within the 28-day deadline set by the House of Commons.

The watchdog undertook a review of the Labour leader’s register entry over the last 12 months and noted four additional late entries.

During the investigation, Starmer also revealed that he was in the process of selling a plot of land for a sum that exceeded the £100,000 ($121,000) threshold for registration.

The commissioner said she decided to include it in her report despite Starmer’s explanation that “he was waiting for the sale to complete so he could register the correct value.”

The other breaches include an £18,450 advance from publisher HarperCollins in April for a book Starmer is writing, which was declared a day late.

He also received a directors’ box for two people at a football match at Crystal Palace on April 4, which was not registered until May 5.

He received four tickets for Watford vs Arsenal, worth a total of £1,416, for their March 6 match. The gift was registered on May 6.

Just Eat also gave tickets to staff for the Taste of London festival and the British Kebab awards in October, but these were not declared until Dec. 23.