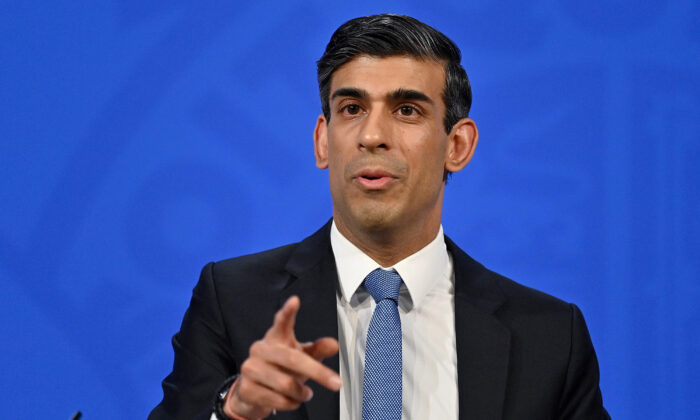 The UK's Chancellor of the Exchequer Rishi Sunak speaking at a press conference in Downing Street, London, on Feb. 3, 2022. (Justin Tallis/PA Media)
UK

But soaring inflation led to interest payments on Government debt rising to the highest level since records began nearly 25 years ago.

Rises in Government receipts helped borrowing levels swing to a surplus of £2.9 billion, compared to a deficit of £2.5 billion a year earlier.

This was above expectations but remains £7 billion below the surplus recorded in January 2020 before the pandemic.

A major factor in the borrowing levels not being higher was the soaring interest being paid by the Government on its debts, which is pegged to the RPI measure of inflation.

RPI hit 7.8% in January, leading to interest payments of £6.1 billion in January—the highest amount for that month since records began in April 1997.

This was £4.5 billion more than the previous January, although they were below the all-time high of £9 billion in June last year.

The ONS added that public sector borrowing from the end of March to December was £138.5 billion—the second highest since records began in 1993.

The data also showed that public sector debt, excluding public sector banks, was £2.32 trillion at the end of the month, or around 94.9% of gross domestic product (GDP).

Chancellor of the Exchequer Rishi Sunak said: “We provided unprecedented support throughout the pandemic to protect families and businesses and it has worked, with the UK seeing the fastest economic growth in the G7 last year.”

The UK saw the biggest economic fall during 2020 of all G7 countries before swinging to the biggest growth in 2021.

Sunak added: “But our debt has increased substantially and there are further pressures on the public finances, including from rising inflation.

“Keeping the public finances on a sustainable path is crucial so we can continue helping the British people when needed, without burdening future generations with high debt repayments.”