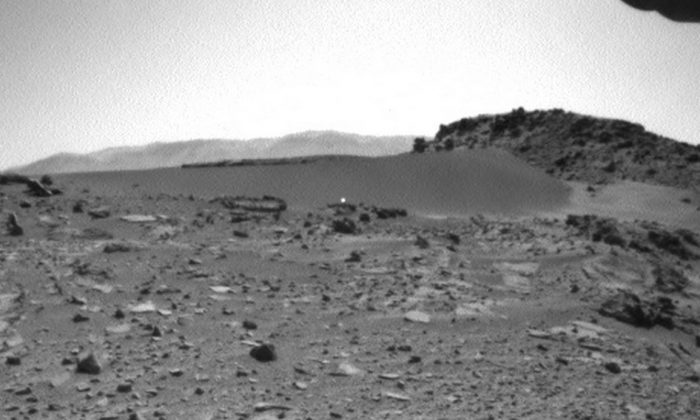 Photo taken of Mars by the Curiosity rover (Marsmobile.jpl.nasa.gov)
Science

A blogger and YouTube users are claiming they’ve found what appears to be a UFO on the surface of Mars.

The users pointed to photos that were taken from the Mars Curiosity rover in 2014.

In the distance, there’s a “white orb” that is moving around on the surface of the Red Planet, the bloggers have said.

“Here we have a mysterious white orb moving around the surface of Mars. Its very similar in color and shape to the orbs seen in the old Apollo mission photos. It was discovered by Paranormal Crucible of Youtube and it is quite remarkable. The orb was caught in not one, but eight different images. This object moves with intelligence. Don’t take my word for it, click the NASA link above to see it for yourselves,” says UFOSightingsDaily.com, operated by Scott Waring.

The photo was taken in Sols Front Hazz Camera and “clearly shows a white ball of light, surveying the Martian surface,” the user claimed.

A few days ago, Waring claims to have found a mysterious “face” on Mars, saying it’s a sign of past life on the planet.

“This rover found some objects and Nasa was pointing them out with different arrows.
“I was just thinking ‘wow Nasa’s really not helping us at all find any of these objects on Mars’and bam, there is an arrow pointing right to the face,” he told MailOnline.