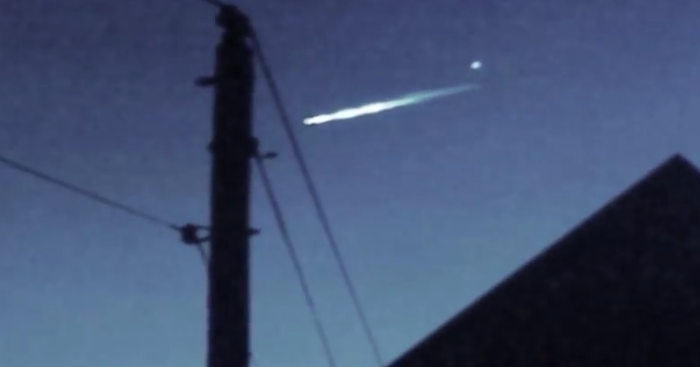 This still image from a YouTube video shows an object, the circle on the top right, after it separated from a streaking meteor. (Ken Roberts/YouTube)
Beyond Science

A possible UFO sighting has been documented in California, captured on video and uploaded to YouTube.

The video shows what appears to be a meteor streaking across the sky.

But the interesting part comes when an object appears to be ejected, or separated from, the meteor, and travels in the opposite direction.

Some commenters say the ejection shows a UFO, though others dispute that interpretation.

“I was driving home after work when this UFO or whatever you call it caught my eye. I pulled over in front of somebody’s house to film it,” said Ken Roberts, who filmed the video.

“I don’t know what the hell to make of it. Couldn’t have been a plane cause there was no noise. And I never heard a crash after either. The Orb thing flew straight up into the sky and disappeared.”

The video quickly caught the attention of the community on Reddit, where a debate erupted over what the video shows.

“It literally is a UFO,” said one person, using the term unidentified flying object.

Others agreed, but others disputed the notion.

“I think this is faked. The explosion sound is synchronized with the separation of the object, which doesn’t seem possible for the implied distance. The masking on the main object gets sloppy near the end of the video, for example as it emerges from around the pole and passes behind/over the last wire. Also just before the last movement of the camera away from the small object, you can see the mask on the main object slip a bit ahead of time,” said one user.

It was noted that Roberts did not provide a date, time, or location in the description.