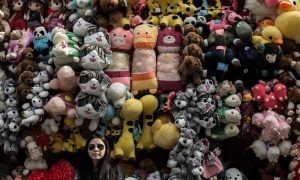 Chinese authorities are forcing Western tech firms out of China, yet Uber is trying to dive in
By Fan Yu
biggersmaller
Print

Ride-hailing service Uber Technologies Inc. plans to spend $1 billion in China this year, in a bid to become one of the first Western technology firms to establish a dominant position in a Chinese industry.

With valuation approaching $50 billion, it is one of the deepest-pocketed startups ever and well equipped to scale its business in China—a country with 500 million smartphone owners.

But Uber isn’t the first tech firm to embark on this journey. Like many before it, Uber may find its path in China fraught with landmines, and any eventual success could prove fleeting.

The company currently operates in 11 cities across China, and plans to expand into another 50 this year.

In a letter to investors on June 12, Uber CEO Travis Kalanick said that China will be the top priority this year.

“Our riders are completing almost one million trips per day and the business has doubled in the last month (in China),” he wrote in the letter, which was first published in the Financial Times. This figure means that Uber’s daily rides in China is close to its number of rides in all other cities combined (as of December 2014 Uber disclosed 1 million daily rides).

Uber plans to raise $1 billion specifically to expand its China operations, and will launch a formal fundraising bid on June 22, according to the letter.

Uber is attracting drivers in China the same way it did elsewhere—by taking no commission and doling out hefty bonuses. In many cases, the company gives bonuses to drivers far above the taxi rate, and sometimes up to three times the amount of the fare.

This has enabled Uber to grow quickly in China, though perhaps not as quickly as Kalanick said. A New York Times report last week, citing Uber executives in China, pegged its daily rides at 100,000. While that estimate is far below Kalanick’s figure, it’s undeniable that Uber has become a hit in some big cities.

“Uber is doing quite well in the first-tier cities, and it’s a bit of a surprise,” You Na, an analyst at ICBC International in Hong Kong told The New York Times. “The subsidies make a big difference.”

But if its track record in other markets is any indication, Uber’s commission-less and bonus-laden generosity will be short lived.

In the United States, where Uber’s base commission is 20 percent, the company is piloting a new program in select cities to charge drivers up to 30 percent in commission depending on number of rides worked. The new tiered commission structure has irked longtime drivers who initially switched to Uber due to its low commission rate.

Its chief competitor in China is Didi Kuaidi, a deep-pocketed taxi-hailing service with more than 90 percent of the market share in China. The company is bankrolled by domestic Internet giants Alibaba Group Holdings Ltd. and Tencent Holding Ltd., is available in over 300 cities across China, and already has Uber’s business model down pat.

“One competitor has cloned our core product line and is attempting to transition from its legacy taxi business to a similar P2P (peer-to-peer) model,” Kalanick described in his letter to investors, declining to actually name Didi Kuaidi.

Uber has also accused Didi Kuaidi of paying people to stage protests against Uber in many cities, and blocking Uber in many direct-to-consumer marketing channels on WeChat, which is owned by Tencent.

One can argue that local competition and foul play are par for the course when expanding into any emerging market. After all, Uber is seeking to become one of the first Western technology firms to crack China. There will be sunk costs.

But even if it’s ultimately successful, there could be a price to pay.

The Chinese Communist Party is in the process of systematically purging most foreign technologies from key sectors, a process that will take until 2020, official sources said. Any lasting success for foreign technology firms, viewed from Beijing’s perspective, is a threat to its national security and its domestic industry.

China Looks to Real Estate Trusts to Prop Up Market

Beijing last year encouraged Chinese banks to stop using servers made by IBM. It branded technology giants such as Microsoft and Cisco Systems—both of which for years worked closely with the regime, even creating products facilitating surveillance and censorship—as security risks.

Earlier this month, Beijing announced new rules governing any foreign technology firm seeking to do business with Chinese banks. The first set of rules mandates that Chinese banks must use “safe and controllable” technology, and any tech firm working with the banks must hand over its source code and encryption keys.

“They want [source code] because they want to steal it,” Steve Dickinson, a lawyer with Harris & Moure who specializes in foreign companies doing business in China, told CNBC.

They want [source code] because they want to steal it.
— Steve Dickinson

The Chinese regime claims these measures are a “counterterrorism” measure. The financial sector is just the beginning; Beijing plans to expand such regulations to other industries.

San Diego-based semiconductor giant Qualcomm was fined $975 million by China earlier this year on “antitrust” allegations. Qualcomm’s crime? There are no national security or terrorism concerns here. Beijing argued that licensing fees paid by Chinese mobile manufacturers were too high. But Qualcomm held the patents, was the industry-leading chipmaker, and Chinese phone makers were happy to pay. In other words, China decided that Qualcomm simply made too much money from the Chinese market, and the regime wanted some of it back.

It’s clear that China wants class-leading technology, and it wants it quickly. The same narrative has played out across several industries and has affected many Western technology firms, automobile companies, and manufacturers that had attained a certain level of success in China.

As for Uber, it’s overseeing its most cautious and meticulous expansion ever. Unlike in other markets where Uber appeared to brazenly flout existing taxi laws, it has used a far more measured approach for its China expansion.

Uber signed a partnership agreement with billionaire investor Robin Li and Baidu. And people with knowledge of the matter told Reuters that Uber has also been seeking closer relationships with local governments across China, in an effort to pre-empt any potential obstacles and political roadblocks.

In late April 2015, police in southern China raided the Guangzhou office of Uber. Police seized thousands of iPhones and other equipment used to run Uber’s business.

While the final return on its Chinese investment remains to be seen, for now, Uber is soldiering onward.