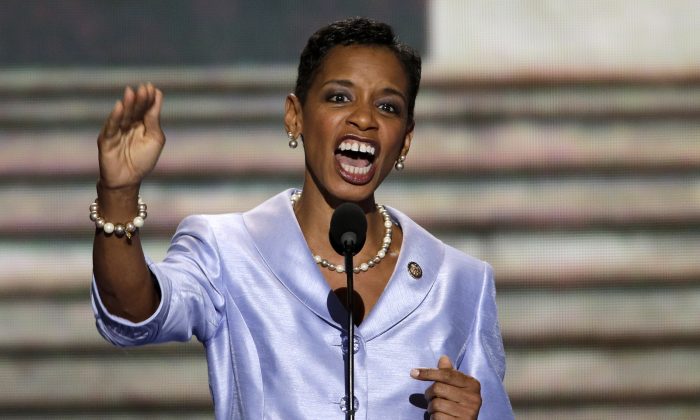 U.S. Rep. Donna Edwards says she’s “deeply troubled” by how the media is portraying the armed militia in Oregon as “occupiers” while Black Lives Matter protesters have been referred to as “thugs.”

“I am deeply troubled by the media portrayal of the events in Oregon and the armed takeover of a federal wildlife refuge,” she said in a statement issued to various media outlets.

Edwards was referring to the armed group led by Ammon Bundy that has taken over a federal building in Oregon.

“Since the beginning of the Black Lives Matter movement, activists protesting the deaths of an unarmed 18-year-old on a city street or the tragic death of a 25-year-old in the back of a police van, have been referred to variously as ‘thugs,’ ‘criminals,’ and ‘drug users,'” Edwards continued.

“But in Oregon, a group of armed men illegally occupying a federal building have been referred to as an ‘armed militia,’ or simply ‘occupiers,’ as though that behavior is acceptable in a nation of laws,” she said.

“Our nation’s press has a long history of shining a light on tough truths and asking tough questions. At this moment, the media have a responsibility to avoid language that paints these armed militants in a positive light. They are breaking the law.”


A spokesman for Edwards, asked for specific examples of the alleged bias against the Black Lives Matter group, cited a comment by CNN’s Don Lemon, reported the Washington Post. The black journalist said while attending a protest in Ferguson, Mo., that “obviously there is a smell of marijuana in the air.” The spokesman also referred to Fox News’ Bill O’Reilly comparing the activists to Nazis.

Edwards’ campaign pointed the Baltimore Sun to a study by a marketing and media firm that found the word employed 168 times per day on television in the weeks following the Ferguson riots.

“But the study doesn’t distinguish between the media using the term to describe rioters and the coverage of politicians like Obama and Rawlings-Blake using it. And the same study found the words ‘peaceful protest’ mentioned in the news nearly 300 times more than the word ‘thug,'” reported the Sun.

Edwards, who is black, is currently running against white Rep. Chris Van Hollen in the race for the Democratic nomination to replace Sen. Barbara Mikulski, who is retiring.

Edwards previously wrote in an op-ed that she was moved by peaceful protest across the country by black activists, but “disgusted” by the looting that took place in Ferguson and other places.