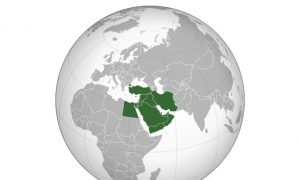 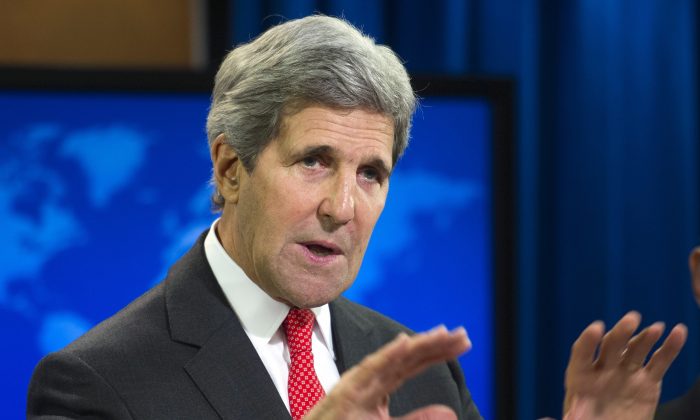 U.S. Secretary of State John Kerry speaks at a news conference to announce the 2013 Annual Report on International Religious Freedom in Washington, D.C., on Monday, July 28. The report states millions of people were displaced from their homes because of their religious beliefs last year. (AP Photo/Cliff Owen)
US

The U.S. State Department released its annual report on religious freedom Monday, noting that 2013 marked “the largest displacement of religious communities in recent memory.” This displacement is occurring “in almost every corner of the globe,” the report stated.

Among the trouble spots, the Middle East, China, and Burma were of particular note.

This year’s report highlighted the displacement of religious minorities in the Middle East, including thousands of Christians who have fled Syria amid the ongoing civil war. The State Department estimates that in the city of Homs alone, the number of Christians has fallen to less than 1,000, from 160,000 before the conflict. There were also reports of extremist groups forcing Christians to convert to Islam.

In Iraq, Christian neighborhoods and businesses continued to be attacked, including one in Baghdad on Christmas Day last year that killed at least 26 people. The Yezidi (a religion of the Kurds), faced discrimination in education and in government employment.

In Egypt too, Islamist-led groups attacked churches and Christian businesses, especially in Upper Egypt. Mobs looted and torched the properties, as well as schools and orphanages that were Christian-affiliated. During an uptick in violence, at least 42 churches were attacked between Aug. 14 and 17 last year.

For the 14th year since 1999, China was designated a Country of Particular concern for its “particularly severe violations of religious freedom,” the report stated.

The Chinese regime continued its persecution of religious groups not sanctioned by the state, including adherents of the spiritual discipline Falun Gong, Tibetan Buddhists, Uyghur Muslims, and house church Christians.

Falun Gong practitioners continue to get imprisoned and tortured for their faith. Thousands have been detained at forced labor camps, known as re-education through labor, where they are tortured with electric batons, forced feeding, and prolonged solitary confinement, the report said.

The Epoch Times has reported that although the regime announced last year that it would close down the camps, reports have emerged that prisoners, many of them Falun Gong practitioners, continued to suffer the same abuses within the camps, although the camps’ names have changed.

Many who are detained are forced to renounce their faith through physical and psychological torture. In particular, many Falun Gong practitioners are detained in psychiatric hospitals where they are given medication against their will and are subjected to electric shock treatment.

Tibetan Buddhists and Uyghur Muslims in Xinjiang continued to face societal and employment discrimination. Tibetans are routinely arrested for worshipping the Dalai Lama, or for showing support for those who self-immolated in protest of China’s rule.

The report also noted that the Chinese regime has sought the forcible return of Uyghurs who sought asylum overseas, and those returned were often imprisoned and tortured. House church Christians are harassed and sentenced to prison for copying sermons.

Burma also made it to the list of Countries of Particular Concern. Anti-Muslim mobs in the city of Meikhtila in central Burma killed an estimated 100 people and displaced roughly 12,000 residents from the area. The violence marks continued tensions between the majority Buddhists and Muslims. Muslims also faced discrimination in employment and land ownership.