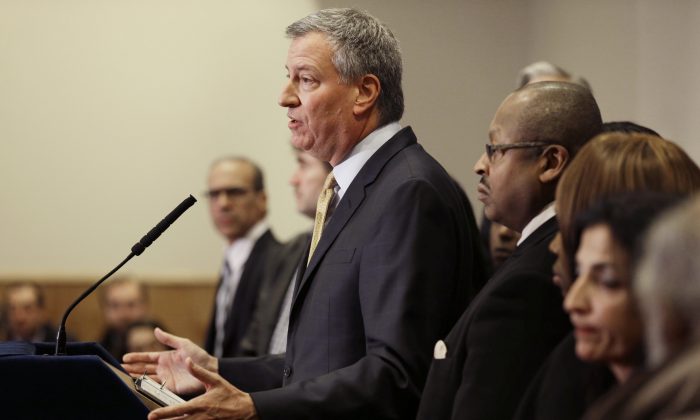 Mayors across the country met with the secretary of the Department of Homeland Security Jeh Johnson, senior adviser to the president Valerie Jarrett, and other federal officials on Monday to better understand the relief programs and their potential impact on municipalities.

Mayors who governed over large populations of undocumented immigrants were invited to the summit, including Mayor Kasim Reed of Atlanta, Ga.

An estimated 170,000 immigrants in Atlanta qualify for the new relief programs, according to Reed, which would put Georgia in the top 10 states with potential beneficiaries.

At a press conference following the summit, de Blasio said the mayors discussed best practices on how to inform immigrants about the programs and prevent them from getting scammed by fraudulent services.

The mayors also promised to audit service providers in their cities to make sure they are effectively and affordably providing assistance to immigrants.

In addition, the mayors formed a “Cities United for Immigration Action” coalition and will all lobby in Washington at a set date in January 2015, for a comprehensive immigration reform bill to be passed in Congress.

De Blasio said that the president’s executive action was a major victory, despite the lack of a legislative bill. “The fact that we went from 0 to 5 million with a stroke of a pen is a transcendent, historical moment for the country,” he said.

He believes giving these immigrants work permits and a chance at economic stability will benefit the whole city’s economy.

Here in New York City, about 114,000 to 121,000 may be eligible for the new relief programs, according to commissioner to the mayor’s office of immigrant affairs, Nisha Agarwal.

The office is coordinating with city agencies and the city’s community organizations to educate immigrants about the relief programs, helping them get their paperwork together for applying to the programs, and providing legal advice.

De Blasio encouraged all immigrants who qualify to make the step forward. To quell people’s fears about the temporary nature of the relief programs, the mayor said, “I have some faith that once this is started, that future presidents will not turn away from it.”