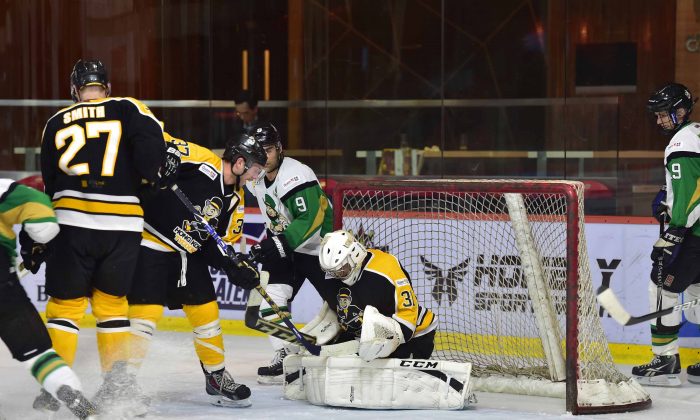 Tycoons Back on Track with Win Over Aces

HONG KONG—Important win for Hong Kong Tycoons over the Macau Aces puts them back on top of the league while South China Sharks overcome the Kowloon Warriors to move them off the bottom rung of the ladder.

Sharks vs Warriors
Michael Yoshino of Kowloon Warriors scored the only goal in the first period in their CIHL match against South China Sharks at Mega Ice on Saturday Nov 22, but Warriors good start was disrupted by sin-bin offences for Greg Smyth, Donald Chow and Eric McKenna.

Alternate scoring for each team in the second session left the Warriors 1-goal ahead on 3-2 at the ice cleaning break. Stark and Ronald Mathez were on target for the Sharks and Greg Smyth and Yosef Natour added to the Warriors’ score.

In stanza-3 it was all Sharks as they scored 3-times, Craig Roessel scored twice and Stark completed his hat-trick to give Sharks a 5-3 win.

Aces vs Tycoons
This was an epic battle between the joint leaders of the League. It was fast and furious with some great attacking moves by both teams. Aces stamped their mark on the game in the last 3-minutes of the 1st period with strikes by Whitney Olsen, Tyler Doherty and Ryan Wong after the Tycoons’ Brad Smith had opened the scoring in the 4th minute.

But Tycoons settled into the match in the 2nd session as danger men Kory Falite and Brad Smith combined up front to score 5-goals: three for Falite and two for Smith to put Tycoons well in control 6-3 at the ice cleaning break.

Falite added his 4th goal 3-minutes into the final stanza and although Aces hit back with two strikes by Taylor Dixon it was 7-5 to the Tycoons turning the tables on their previous week’s defeat.