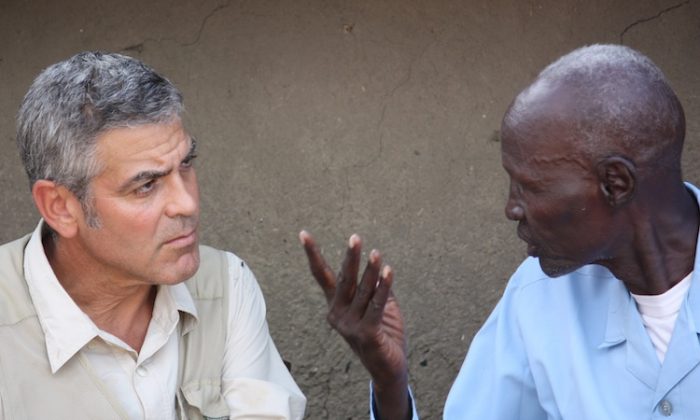 Actor George Clooney in South Kordofan, at the border between Sudan and South Sudan. Clooney went to the Nuba Mountains in the north to raise awareness on the humanitarian and security plight of the local Nuba people. (Courtesy by Enough Project)
Africa

The tenuous calm between Sudan and South Sudan may have just burst. On Wednesday, in an emergency session, the Sudanese Parliament declared a general mobilization of the army after soldiers from South Sudan gained control of the oil-rich northern town of Heglig.

The escalation comes as African Union’s mediator, former South Africa President Thabo Mbeki, was hoping to broker another peace summit between the restive neighbors. But all bets are off. The Parliament in Khartoum declared it was also withdrawing from the African Union’s peace process, according to a report in the Sudan Tribune on Wednesday.

This puts the two Sudans as close to war as they’ve been since the South became independent last July and since the government in Juba decided to turn off the oil wells at the end of January.

Renewed war has been threatening for months with intermittent clashes in the border states of Blue Nile, South Kordofan, and Abyei. More importantly, the many outstanding issues from Juba’s succession nine months ago, such as oil revenues, border demarcation, citizenship, and division of debt, are still far from settled.

Until the two parties can reach amicable solutions to these issues, Sudan observers warn that conflict is inevitable, and the danger of an all-out war looms large.

“If tensions are not addressed, the sporadic fighting we have seen between North and South forces along the border could trigger a rapid escalation that could bring the countries to the brink [of war],” Daniel P. Sullivan, director of policy and government relations at End Genocide activist organization, wrote via email.

The original summit was scheduled for April 3, but was called off by Sudan’s President Omer Hassan al-Bashir after South Sudanese soldiers attacked the oil field in Heglig inside Sudan’s South Kordofan State. Juba said the attack was payback for the Sudan Armed Forces’ (SAF) bombing of oil fields in the South Sudan’s Unity State a few weeks earlier.

Last week, Khartoum rejected a deal proposal by the African Union High Implementation Panel (AUHIP) for a ceasefire and withdrawal of armies. Khartoum accused Juba of not admitting it supported the rebel Sudan People’s Liberation Movement/Army-North (SPLA-N), which fights the SAF on the northern side of the border. Juba at the time was ready to sign the deal.

As recently as last week, Mbeki met with the two sides separately and concluded that war was not imminent.

“I have confidence that the leadership of the two countries will reach an understanding to resolve issues currently under discussion,” Mbeki told media in Juba on April 5.

The current conflict is a continuum of two Sudanese civil wars, 1955–1972 and 1983–2005. The latter claimed 2 million lives, largely in the Khartoum-sponsored genocide in Darfur. The war ended with the signing of a Comprehensive Peace Agreement (CPA) in 2005 that included the terms for South Sudan’s secession.

No Oil: “We Can Hold Longer than You!”

Control over oil has been a defining theme throughout. The borders of South Sudan now contain 75 percent of the region’s oil; the north earns its revenue from transporting that oil to Port Sudan for export through its pipelines.

Khartoum claims that the state of South Sudan has yet to pay any dues for using the pipeline and is $1 billion in arrears. Juba in turn, accuses the Sudanese government of confiscating $815 million of South Sudan’s crude oil.

At the end of January, South Sudan shut off all of its 300 oil wells in Unity State to choke Sudan’s revenue stream and hopefully break the stalemate in negotiations.

Continued on the next page: Stuck in the Middle