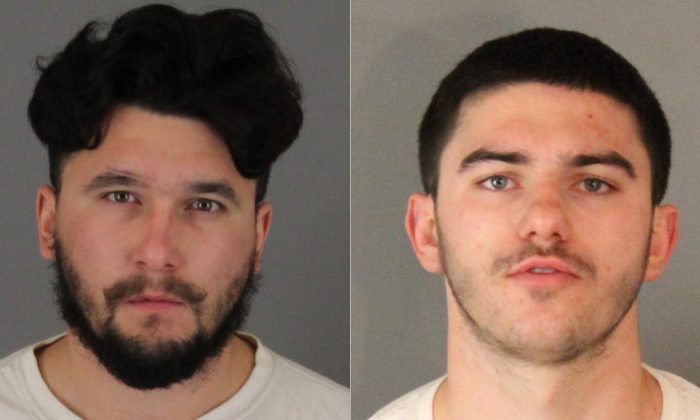 The two brothers were taken into custody on Feb. 11 at approximately 10:30 p.m. after members of the Sheriff’s SWAT team served a search warrant at a residence in the city of Hesperia. Other law enforcement agencies assisted with the apprehension, including the Sheriff’s Central Homicide Unit, Major Crimes Unit, and the Moreno Valley Police Special Enforcement Team.

‘A Victim of Homicide’

“Evidence was collected that confirmed Ms. Briones was a victim of homicide and points to these two brothers,” Riverside County Sheriff’s Lt. Chris Durham told reporters at a press conference streamed on the department’s Facebook page.

“Early on in the investigation it was learned that Ms. Briones’ was last seen with Owen,” Durham noted.

Owen Shover, the younger of the two brothers, was a high school friend of the missing teenager.

“I think he’s a bad influence, in my opinion,” Aranda’s uncle Matthew Horstkotte earlier said of the 18-year-old Shover, according to ABC7. “He used to go to Moreno Valley High School, and they stopped hanging out for, like, a year. She never talked about him and then, all of a sudden, they started hanging out and out of the blue air she disappeared.”

Sheriff Chad Bianco told The Press-Enterprise that the younger Shover had been in a prior relationship with the missing girl.

The younger Shover claimed to have last seen Briones on Jan. 13 near Moreno Valley Community Park, according to the L.A. Times. He reportedly told both family and investigators that after dropping her off, he saw her get into a gray four-door car.

She has not been seen since.

“The cameras were reviewed and ultimately it destroyed the timeline he provided,” Durham said, adding that homicide investigators obtained evidence leading them to believe Briones was murdered.

Neighbors cited by ABC7 said investigators found several items last month at the suspects’ home after digging up parts of the property.

“It was like a blanket and a coat,” a neighbor said, “and then they started sitting all these little markers around and digging in other places.”

The evidence led investigators to obtain arrest warrants for the Shover brothers.

Yet Briones’ body has still not been found.

“Sadly, cases like this are hard for everybody,” Durham said. “The community came together in hopes to find Ms. Briones.”

“This is an active investigation and we are still seeking the public’s assistance in helping us find Aranda,” the Sheriff’s office said in a statement.

Members of the missing girl’s family spoke to reporters after the announcement of the Shovers’ arrests.

“Her room’s empty in the house … She wanted to go to college, she loved helping people,” a tearful Horstkotte said, according to KTLA5. “And it’s taken away. I don’t wish this on anyone.”

Horstkotte told ABC News earlier that he was sure her friends knew more than they were saying.

“Nowadays, you know teenagers want to cover up for a friend, or someone says, I don’t want to tell because I’m scared,” he said.

“But just come forward,” he pleaded. “The only person you’re hurting right now is Aranda.”

There is also a Facebook page devoted to locating the lost teen: “Help us find aranda briones”