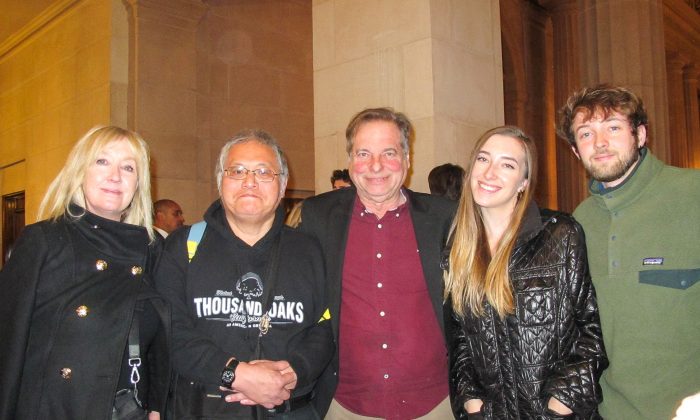 SAN FRANCISCO—Karen Juve, a TV producer for The Africa Channel, had high praise for Shen Yun Performing Arts when she saw it with her family and her friend in San Francisco on Jan. 5.

“Beautiful,” she said. “The dancers were absolutely stunning, and we enjoyed it very much. … The production was incredible.”

New York-based Shen Yun travels the world every year with an all-new program of classical Chinese dance and live orchestral music. Classical Chinese dance is an independent dance system thousands of years old, and Shen Yun presents it in its purest original form without mixing in modern dance styles, according to the company’s website.

“The dancers were amazing!” said Juve. “I kept oohing and aahing, and these people kept nudging me to shut up, but I was absolutely in awe of how elegant they were, especially when they were doing their leaps. And you don’t even hear them when they land on the stage. It was beautiful.”

A state-of-the-art digital backdrop provides scenery for the dance pieces, showing landscapes from China or scenes from myths and legends. The Shen Yun backdrop is a unique and patented invention. Juve admired the way the dancers interacted seamlessly with it.

“I’m trying to figure out how they did that background,” she said. “It was unbelievable; it was so seamless, and I’m going to look it up when I get home. I want to see how they did it, because it was just beautifully done.”

Besides being artistic displays, Shen Yun’s performances also serve a higher purpose. Shen Yun’s mission is to revive China’s 5,000 years of ancient culture, which was almost destroyed in China under today’s communist rule.

“It was very inspiring to see how these people, who come from a place where they don’t have the kind of freedom that we do in America, are able to celebrate their culture the way they are here,” said Juve. “It’s great. I think it’s wonderful for Americans to see that, and I hope that they’re inspired as well.”

Shen Yun dancers perform classical Chinese dances and ethnic and folk dances from China’s different dynasties and regions. Some of the dance pieces tell stories from ancient China or modern-day tales of faith and courage.

“The message itself—it definitely resonated with me,” said Juve. “I know it does with my kids and with my friend, and I’m walking out of here feeling lifted and feeling absolutely wonderful in this new year. … The message, to me, was just to be inspired by the freedom to perform and celebrate your culture.”

As a VP for The Africa Channel, Juve understands what it means to celebrate different cultures.

“I believe that what Shen Yun is doing is celebrating a culture that could be eliminated from society if they don’t keep having Shen Yun … perform throughout the world,” she said.

Shen Yun aims to portray China’s ancient values, such as wisdom, benevolence, and faith in the divine. Since these traditions are oppressed in modern China, Shen Yun cannot perform in China today.

“The way that they dance and move was extremely divine, and it was heavenly, just the way that the program was supposed to be depicted,” said Juve.

“The traditional Chinese values are something to be really proud of and to be inspired by, and so I would hope that—well, Americans, I think, will celebrate it and understand it, but I hope that someday these people can celebrate their culture in China,” she said.

With reporting by Mary Mann and Sally Appert.