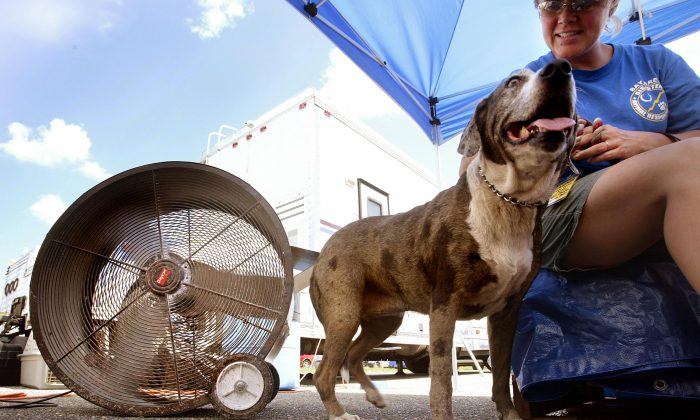 A Catahoula hound in a file photo. (Mario Tama/Getty Images)
Crime and Incidents

The young son of a California TV anchor underwent surgery after a being mauled by a dog.

“Prayers for my son who was mauled by a dog this morning. I’m a total wreck of a mom right now and could use your support. Thank you,” Veronica De La Cruz, an anchor for KPIX News, posted on Facebook.

Her 4-year-old son, Hartley, was attacked on Monday by a Catahoula cur, a herding dog that can weigh up to 95 pounds and be up to two feet tall, according to PetMD.

“The Catahoula Leopard Dog is very loving with family, but may be wary with strangers if it’s not socialized early on. Catahoulas are protective of the family, and make excellent watchdogs,” according to the website. “The Catahoula does not allow mistreatment and may assert itself in self-defense. Overall, this breed requires a good amount of teaching and exercise or else it can be very destructive in the home. It does not make a good city or apartment dog.”

The dog is owned by a close family friend and Hartley has known the dog since he was two years old, reported the San Francisco Chronicle.

Hartley has undergone two surgeries so far—one on Monday and one on Tuesday.

De La Cruz, who also hosts “Bay Area Nightbeat” on KBCW, posted a photo of her son bandaged and sleeping on a hospital bed, thanking people for their support.

The young son of KPIX 5 anchor Veronica De La Cruz was recovering Tuesday after he was mauled by a family friend's dog and underwent surgery for his injuries. https://t.co/xlM4NHdDE3 pic.twitter.com/6S5fnM1kx8

A third surgery was scheduled for Wednesday.

De La Cruz later made another post on Facebook asking people to attend a masquerade ball since she wouldn’t be able to attend.

“Please consider a ticket or a donation to one of our littlest heart transplant patients in need,” she wrote.

“Now that I am totally focused on my son, these babies will need you. Helping me help them will take one more thing off my plate so I can focus on my own baby.”