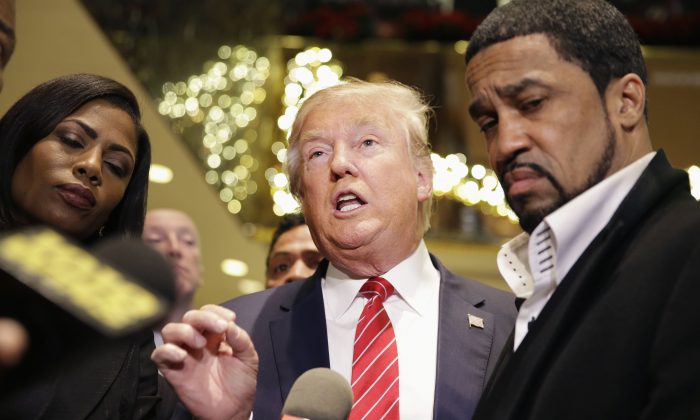 A television host has invited any of the black pastors who attended the private meeting with Republican presidential candidate Donald Trump to come onto his show and discuss what took place during the event.

“Come on this show and talk to Black America about what you talked about with Donald Trump about black folk,” NewsOne Now host Ronald Martin said.

“Otherwise all y’all did was waste your damn time.”

The challenge came after Jamal Harrison Bryant, a Baltimore pastor who did not attend the meeting, said on CNN that one of the pastors who went to the meeting was a “pawn” and all of them were “prostitutes.”

WATCH! Roland Martin Offers Open Invitation To Black Pastors To Talk Specifics, Policy And What Was Discussed During Meeting With Donald Trump. #NewsOneNow

“I want to apologize, because prostitutes get money. And the 100 that went in there walked away with nothing, they did it for free,” he said. “So there’s another word for that, and I would not use that language on a family channel.”

Initially, around 100 pastors were scheduled to attend, but some confusion over whether the meeting was a discussion or an endorsement prompted many to cancel.

It was reported that around 30 pastors attended the closed-doors meeting with Trump, the GOP frontrunner.

Darrell Scott, the pastor who arranged it, called the meeting historic afterward.

“We made history today because we had meaningful dialogue with Donald Trump, and we voiced concerns that are sensitive to the African-American community,” he said.

“We asked questions were answered and we were satisfied with the answers and we’re a unified front right here. We had a wonderful time, a wonderful dialogue, wonderful fellowship, wonderful interaction. It was a great day.”

Not all of the discussion was made public, but the pastors all had issues they wanted to discuss with Trump, such as Bishop George Bloomer of North Carolina, who went to call Trump on alleged racial slurs. He said afterward he was “satisfied” with Trump’s response.

“We expressed to Mr. Trump, that in order to win people in our congregations . . . you’re going to have to change the rhetoric and tone down the things that you say that seem demeaning to people,” added Bishop Orrin Pullings Sr. of Virginia.