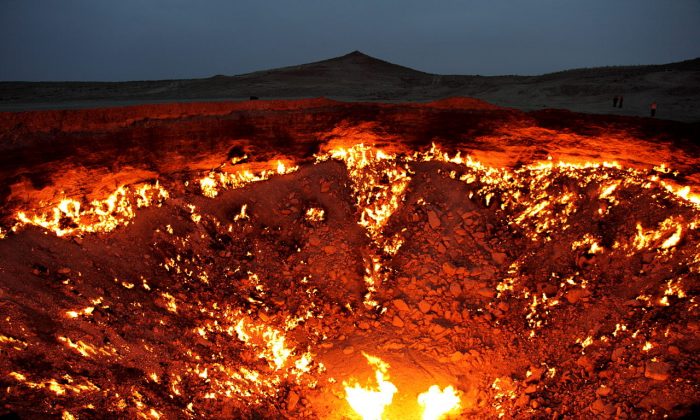 "The gates of hell" gas deposit, near Derweze, Turkmenistan, has been burning since 1971. (Wikimedia Commons)
Asia & Pacific

President Gurbanguly Berdymukhamedov of Turkmenistan has reportedly ordered officials to find a way to finally put out a fire in a vast natural gas crater that has been burning since 1971 and is known locally as the “gates of hell,” citing environmental and health concerns.

Berdymukhamedov said in a televised address on Jan. 8 that the fire in the Darvaza crater in the Karakum desert—officially named the “Shining of Karakum”—must be extinguished as it “negatively affects both the environment and the health of the people living nearby.”

The president also noted that the crater is a waste of valuable natural gas resources from which the country could profit, local reports stated.

“We are losing valuable natural resources for which we could get significant profits and use them for improving the well-being of our people,” Berdymukhamedov said.

The crater was formed during the former Soviet Union’s rule, when a Soviet drilling rig hit an underground cavern, which collapsed into a pit about half a mile across. Soviet miners set fire to the pit to burn off the toxic gases, and the fire was expected to go out shortly afterward.

But the crater has remained ablaze ever since and has grown to become one of the country’s most popular tourist attractions.

Berdymukhamedov, who has been in power since 2006, previously commissioned a team in 2010 to find ways to extinguish the fire.

Canadian explorer George Kourounis, the first person to descend into the crater in November 2013, discovered that “there are no records” of the crater’s formation. He noted that some local Turkmen geologists have said the crater was actually formed in the 1960s.

“I’ve heard from the local Turkmen geologists, who have been there for decades, that the collapse may have happened in the ’60s and that it went unlit until the 1980s,” Kourounis told National Geographic in a 2014 interview.

“There are no records. We tried to find any old incident reports or anything like that, and the department of geology just didn’t have anything that dated back that far. Part of it still remains a mystery.”

Kourounis described the crater as a “coliseum of fire,” where he found signs of some bacteria thriving in a fiery ecosystem at the bottom.

“We did find some bacteria living at the bottom that are very comfortable living in those high temperatures, and the most important thing was that they were not found in any of the surrounding soil outside of the crater,” he said.