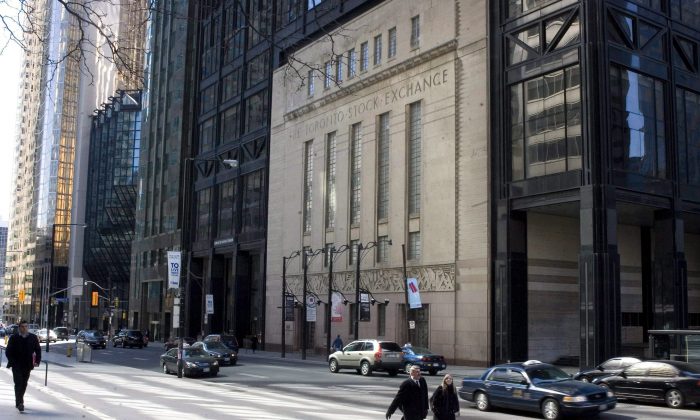 The Toronto Stock Exchange building on Bay Street is shown here in a file photo. The TSX had a strong 2013 despite weakness from precious and base metals. (The Canadian Press/Chris Young)
Canada

TORONTO—The Toronto stock market closed higher on Dec. 31 as investors closed the books on a year that saw a solid advance.

The S&P/TSX composite index climbed 40.16 points to 13,621.55 with gains for the day led by the battered gold sector, by far the biggest loser on the Toronto market this year.

The TSX ended 2013 up 9.55 percent for the year, with the advance racked up over the last five months.

“The back half of the year was really the inflection point,” said Craig Fehr, Canadian markets specialist at Edward Jones in St. Louis.

He observed that was the point where the market started to transition from one that was driven by central bank stimulus to an environment where investors started to focus more on economic fundamentals.

TSX gains for the year would have been greater if not for deep losses in the mining sectors. The gold sector fell about 48 percent for the year while the precious metal has fallen about 28 percent, the first annual loss since 2000.

Gold prices have taken a big hit this year as the global economy gradually improved and the U.S. Federal Reserve made moves to cut back on its monthly bond purchases, a key area of stimulus.

In addition to the big losses in gold, the base metals component has retreated 21 percent as an uneven global recovery kept the lid on commodity prices.

Outside of the mining sectors, most TSX sectors did quite well for the year.

“Roughly half of the TSX sectors are up double digits or more for the year,” said Fehr.

“And when you look at industrials, consumer discretionary, there are some very strong gains and I think the investments that were really tied to fundamental growth, better manufacturing, consumer spending around the world, those are areas that did exceptionally well.”

Financials were up 22 percent for the year. Insurance companies were particularly strong performers as companies benefited from strong stock market gains and rising bond yields.

Industrials also had a good year, up about 35 percent as railroad stocks shot ahead, helped along in large part by rising shipments of crude oil. Fresh questions about rail transport safety for crude will be asked after a 1.6-kilometre-long train carrying crude oil derailed outside of the town of Casselton, North Dakota on Monday.

The TSX energy sector was ahead 0.47 percent Tuesday, for a gain of about 9.5 percent for the year.

Most TSX sectors were positive but the tech sector shed 0.3 percent. However, BlackBerry (TSX:BB) gained 18 cents to $7.90, a long way from its 52-week high of $18.49. Prices started to plummet mid-year when it became apparent its new lineup of smartphones had widely missed expectations.