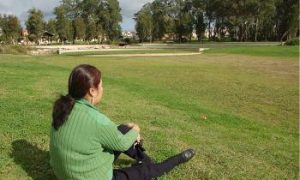 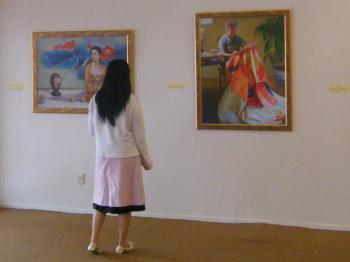 The exhibition will continue until Oct. 18. (Diane Cordemans/The Epoch Times)
US

By Diane Cordemans
Print
NEW ZEALAND—"The message is beautiful, but at the same time, the message is horrible," summed up Jack Gielgen, Community Radio Host, at the opening of the Truth Compassion Tolerance International Art Exhibition in Hamilton, New Zealand.

Mr Gielgen was one of several speakers at the opening of the exhibition on Sept. 28.

"The high quality of the artwork was remarkable," said Mr Gielgen, "but I can see that the artists are depicting what is going on behind the scenes."

The American lady in Stirred by Her Song illustrates the guilt felt by the guard who was watching over her in prison.

“He is obviously feeling guilty because of what the Chinese regime is doing … taking the rights of the Falun Gong people away from them and trafficking in body parts and persecuting this minority,” he said.

In real life people don't want to deal with tragedy and with death, said Mr Gielgen, and art may just be "pretty" or "lovely" unless it is depicting the suffering that is going on behind the scenes.

Bruce Clark from the local branch of Amnesty International told the audience that governments that commit human rights abuses are happy for people to remain ignorant.

The Truth Compassion Tolerance Art Exhibition is an "overall part of a process in education and fostering that awareness" of the persecution.

“There is also a calmness and positivity that can be seen in the paintings so it is not all doom and gloom. Something positive comes out of that suffering that is something that I get out of it," he concluded.

Being up front and outspoken is necessary, was the opinion of teacher, Jimmy Phillips, who has spent four years working in China.

“We need to see how many people die in China. How are they being crucified. How are they being sacrificed for their body parts. What is happening to them. We must look at this and be able to ask the question, because if you don't ask questions, you never get the answers.”

“Before I signed up for a contract in China I had to sign a document saying [I would not talk about] religion or speak anything about the Communist party or have religious meetings,” said Mr Phillips.

Because there is freedom of speech in New Zealand, Falun Dafa practitioners, are able to tell people about the persecution in China.

There has been a steady stream of visitors to the exhibition with many comments in the Visitor's Book expressing feelings of gratitude for the opportunity to learn about Falun Gong.

The exhibition will continue until October 18.