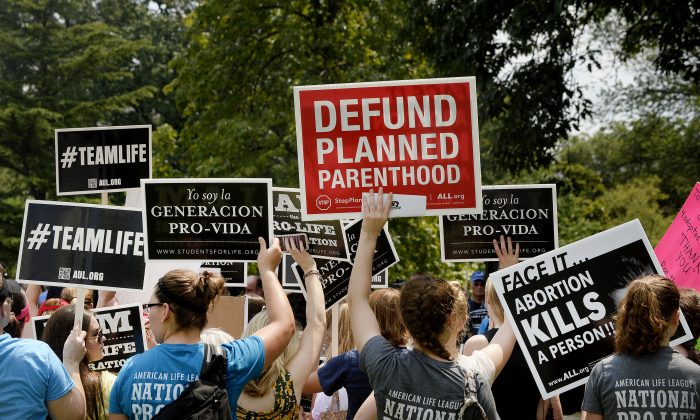 Activists hold a rally opposing federal funding for Planned Parenthood in front of the Capitol in Washington on July 28, 2015. (Olivier Douliery/Getty Images)
Viewpoints

Trump’s Title X Changes Are Life-Affirming, Favored by Most Americans, and Legal

Not only are President Donald Trump’s sweeping changes to Title X long overdue and financially prudent, but they might be a good way to call Planned Parenthood’s bluff about federal funds, even while Americans and the Supreme Court support this rule.

On March 4, the Trump administration made good on its word to support the unborn, and published in the Federal Register its final rule that will finally solidify sweeping changes to Title X, the federal program that provides birth control and other reproductive health services to American citizens.

This has been a long time coming: Trump first announced he was trying to adopt an imitation of former President Ronald Reagan’s rule during the spring of 2018. Reagan’s policy was challenged and upheld by the Supreme Court (though former President Bill Clinton eradicated it). So, this is a rock-solid way to both call the bluff of the abortion industry’s claim that they don’t use federal funding to perform abortions, and promote the sanctity of the unborn—all while remaining legally and financially prudent, since the majority of Americans don’t support the federal funding of abortion anyway.

What Will Trump’s Title X Rule Do?

When applied in 60 days from publication, Trump’s rule will essentially strip Planned Parenthood of its abortion funding, if it continues to use taxpayer subsidies to pay for abortions. The rule is an attempt to reassert Reagan’s life-affirming Title X rule, which the Clinton administration reversed and has never been righted since. The policy will ensure taxpayers don’t fund, facilitate, or promote abortion in America’s $286.5 million program that “serves over 4 million low-income, uninsured, and underserved clients,” according to health policy nonprofit KFF.

The Department of Health and Human Services (HHS) fact sheet describes several major provisions, but the three most important aspects of the new rule are these:

The Title X Family Planning Program was enacted under President Richard Nixon in 1970 as part of the Public Health Service Act. Liberals loved this program like Planned Parenthood loves abortion; the two immediately became a toxic mix, like kerosene and diesel, and created an explosion of intended—and unintended—consequences.

The Guttmacher Institute described Title X as something that “has helped build a national network of family planning clinics, has established the standards used for the delivery of high-quality but low-cost family planning services nationwide and has enabled millions of women to plan their pregnancies and prevent unintended births. Since 1980, Title X has helped women avoid almost 20 million pregnancies, and has provided key reproductive health services to millions of women.”

Sounds fantastic right? Not so much. President Reagan—God rest his soul—didn’t like that Title X was becoming the underhanded chaperone of abortion activity, so in 1988, he instituted what became known as the “domestic gag rule,” which was aimed both at Title X’s spending and abortion counseling.

In 1988, the secretary of the Department of Health and Human Services issued new regulations, with three principal conditions regarding the way federal funds for Title X projects were allocated: 1) funds couldn’t be used to provide abortion counseling; 2) funds couldn’t be allocated toward things that encouraged, promoted, or advocated abortion as family planning; and 3) funds had to be arranged such that they were physically and financially separate from prohibited abortion activities.

This became so controversial, it went all the way up through the legal system and landed at the Supreme Court in Rust v. Sullivan—with Irving Rust, representing Title X grantees and doctors supervising said funds, suing HHS, which was headed by Louis W. Sullivan at the time the case was heard.

The majority tossed out the first issue and decided the law was valid under the Chevron rule, “which held that reasonable executive applications of ambiguous statutory language required deference, even if these regulations revised longstanding interpretation,” according to The First Amendment Encyclopedia. For the second, the majority rejected the claim by the other justices that the “executive’s ‘interference’ in the doctor–patient relationship constituted a violation of a woman’s reproductive freedom under Roe v. Wade (1973).” Roe doesn’t require states to fund abortions under Medicaid.

The third issue proved to be the most challenging. Were the regulations, which the challengers called a “gag order,” “consistent with the First Amendment rights of practitioners who received Title X funding, by conditioning the receipt of federal funds on not engaging in particular types of speech”? The majority held that the regulations didn’t interfere with First Amendment rights because the government never intended to fund abortion within the Title X programs. “Refusing to fund speech that went beyond the scope of a program did not constitute the suppression of a particular point of view.”

The decision in Rust v. Sullivan left the issue of interpreting Section 1008 of Title X with the executive branch. As a result, the new regulations were almost immediately rescinded by President Bill Clinton and weren’t restored by the administration of President George W. Bush.

Justice William Rehnquist upheld HHS’s regulations writing, “a doctor employed by the project may be prohibited in the course of his project duties from counseling abortion or referring for abortion. This is not a case of the Government ‘suppressing a dangerous idea,’ but of a prohibition on a project grantee or its employees from engaging in activities outside of its scope.”

Scholars believe “Rust proved to be an indicator of the Court’s shifting attitudes toward abortion, as well as a major pronouncement about the doctrine of unconstitutional spending, which holds that federal funds may only be spent on those purposes for which they are allocated.”

Senior Counsel Denise Burke of the Alliance Defending Freedom said, “The tax dollars of Americans should never be used to fund abortion, shield child abusers, or force medical professionals to violate their convictions by participating in the end of human life. … The Protect Life Rule, which the U.S. Supreme Court has upheld, will prevent organizations like the nation’s largest abortion business, Planned Parenthood, from funding their abortion activities through the Title X program.”

Ironically, in a near-replica of history, after Trump issued his 2018 Title X Funding Opportunity Announcement (FOA), “three Planned Parenthood affiliates and the National Family Planning and Reproductive Health Association (NFPRHA) sued HHS, claiming that the FOA violates the Title X statute and regulations, and wasn’t promulgated through proper rulemaking,” KFF reported. Last summer, “the U.S. District Court for the District of Columbia ruled in favor of the Trump administration, a decision the plaintiffs have since appealed.”

In essence, these Title X rules have worked before, have been upheld at the Supreme Court, and are a perfectly legal method of stripping abortion funding.

Interestingly, while Trump’s new rule does say it “permits, but no longer requires, nondirective pregnancy counseling, including nondirective counseling on abortion,” HHS also made clear in their May 2018 press release on the rules that, “Contrary to recent media reports, HHS’s proposal does not include the so-called ‘gag rule’ on counseling about abortion that was part of the Reagan administration’s Title X rule.”

While some conservatives might balk at this, I think it shows a bit of strategic nuance: Trump did not overplay his hand and risk a legal showdown with a full Reagan-like gag rule. However, he did make it clear that counseling on abortion is permitted but not required. Pro-life advocates should take it and run with it, and not allow the best to be the enemy of the good.

Probably one of the most interesting side-effects of Trump’s rule is how much it will, incidentally, call Planned Parenthood’s bluff on federal spending.

Planned Parenthood has always received huge chunks of money—over $300 million annually in taxpayer subsidies through Medicaid. They claimed this was fair, legal, necessary, and really only spent on health care and “reproductive services.”

Most Americans were unaware or unconcerned about this huge price tag until a dozen shocking undercover videos revealed that Planned Parenthood was so brazen in its abortion mission, it allegedly orchestrated to make a profit off aborted baby parts. Then came a myriad of investigations, not just about whether or not Planned Parenthood was doing that, but how it was actually using its federal monies. That led Planned Parenthood to claim in an annual report that only 3 percent of its services were abortions, even as the House Oversight Committee found they needed no federal funds.

However, it didn’t take a math genius to figure out that Planned Parenthood had been dishonest about its numbers. Their 2018 report revealed that from 2013 to 2015, Planned Parenthood and its affiliates spent $288 million in federal funds and had received $1.2 billion in funding from Medicaid, a combination of federal and state funds.

Despite this incredible outside funding, more and more Planned Parenthood facilities shut down, it served fewer women than ever before, and performed fewer health care services—such as cancer screenings, breast examinations, and HPV vaccinations—than it did the year prior. However, Planned Parenthood did perform about 4,500 more abortions than the year prior. The organization had a $20 million revenue increase from 2015 to 2017.

Essentially, Planned Parenthood was fond of saying they didn’t need federal funding because they didn’t use it for abortions, even as their abortion rate went up, their other services went down, and their income skyrocketed. Nice Catch-22 if you can spin it, but abortion is still a polarized issue. A recent Marist poll found 54 percent of Americans oppose taxpayer funding of abortion, so it needed to be slashed.

In a sweeping reform that took less than a year, Trump has honored the majority of Americans’ views on federal funding of abortions, forced the abortion industry to be more fiscally responsible while calling their most outrageous bluff, and most importantly, stood up for the sanctity of unborn lives.