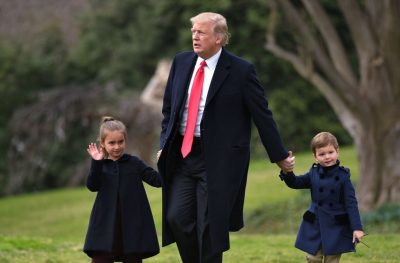 President Donald Trump makes his way to board Marine One with grandchildren Arabella Kushner (L) and Joseph Kushner in Washington, D.C., on March 3, 2017. (MANDEL NGAN/AFP/Getty Images)
US News

President Donald Trump’s granddaughter Arabella Kushner became an unexpected sensation in China after state media aired a video of her singing a song in Chinese and reciting a classic children’s text.

Trump showed a video of 6-year-old Arabella, Ivanka Trump’s daughter, to Chinese leader Xi Jinping during their visit to the Forbidden City on Wednesday, Nov. 8.

Chinese state media gave her an “A+” for her performance.

“This kind of special arrangement is actually very sweet and warm-hearted. We believe that this has helped to further bring closer the affection and distance between the Chinese and American people.”

The full video above was played during a state dinner on Thursday.

“Our children so often remind us of our shared humanity and true dignity,” Trump said in a toast to Xi, according to AFP.

Chinese social media platform Weibo was flooded with adoring messages about the girl.

“She’s too cute!” one user wrote. “Let’s hope that she marries into a Chinese family.”

Arabella started her performance by greeting the Chinese leader and his spouse, referring to them as “Grandpa Xi” and “Grandma Peng.” She then starts singing a traditional Chinese song.

According to Newsweek, Arabella started learning Chinese when she was 3 years old. Joseph Kushner, Trump’s 3-year-old grandson, is also learning Chinese. Ivanka Trump also posted a photo of her 1-year-old Theodore Kushner playing with blocks with Chinese characters on them.

The best moment of the day!

After singing the traditional song, Arabella launched into a recital of the “Three Character Classic,” a classic Chinese text written during the Song dynasty in the 13th century.

The “Three Character Classic” was part of Chinese education for centuries. It is written in simple three-character lines that are easy for children to memorize, yet carry deep meaning and lessons on morality, filial piety and respect for elders.

Arabella recited several verses from the beginning of the work:

“Men at their birth
are naturally good.

Their natures are much the same;
their habits become widely different.

If foolishly there is no teaching,
the nature will deteriorate.

The right way in teaching
is to attach the utmost importance to thoroughness.

Of old, the mother of Mencius
chose a neighborhood;

and when her child would not learn,
she broke the shuttle from the loom.”

After reciting a few more verses, Arabella then recited several poems with excitement, using her hands at times to express the meaning for some lines.

The first poem she launched into was “Viewing the Waterfall at Mount Lu” the Daily Mail reported.

The verse goes as follows:

“Sunlight streaming on Incense Stone kindles violet smoke;
Far off I watch the waterfall plunge to the long river,
Flying waters descending straight three thousand feet,
Till I think the Milky Way has tumbled from the ninth height of Heaven.”

Arabella singing a song she learned for #ChineseNewYear. Wishing everyone an amazing year to come during these days of celebration. 新年快乐！ pic.twitter.com/jxHHLvhmzm

Ivanka Trump has posted other videos of Arabella singing and speaking Chinese on her social media accounts.