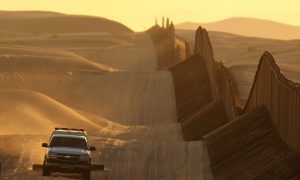 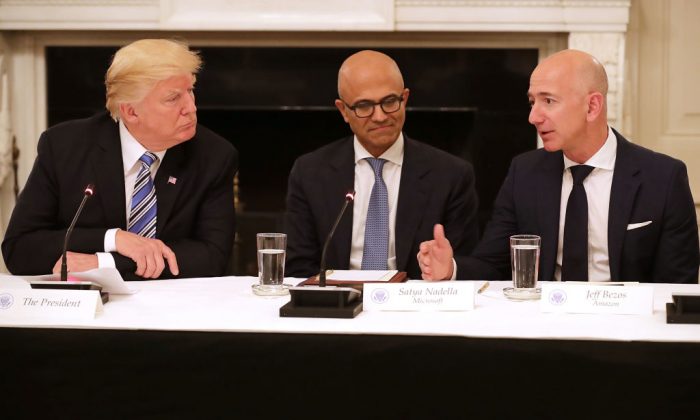 The online retailer collects sales tax in every state, but Trump still has a legitimate claim
By Emel Akan
biggersmaller
Print

Amazon and its founder Jeff Bezos have been frequent targets of President Donald Trump, who calls the online retail giant a “no-tax monopoly.” On Aug. 16, Trump criticized Amazon again on Twitter, claiming the company is hurting retailers and killing jobs.

“Amazon is doing great damage to tax paying retailers. Towns, cities and states throughout the U.S. are being hurt—many jobs being lost!” Trump wrote in a tweet.

The company has expanded its sales tax collection from customers dramatically over the last few years. But Trump still has a legitimate claim: The retail giant is collecting tax only on its direct sales and not on sales that third-party merchants make through the Amazon website.

More than half of items sold on Amazon are coming through third-party retailers, according to a CNBC report. These retailers can benefit from Amazon’s facilities or payment system, but they are not required to collect sales tax.

It is still a pending issue and a meaningful revenue loss for states, said Carl Davis, research director at the Institute on Taxation and Economic Policy (ITEP), a nonprofit research organization.

Some states have already started to figure out ways to solve this problem.

Minnesota and Washington are the first states to enact laws requiring online retailers to collect tax on third-party transactions. Other states, like South Carolina, have also started challenging Amazon.

This issue is going to be a battleground in the coming months and years, Davis said.

Online retailers can legitimately avoid collecting state sales tax if they don’t have a facility in that state. Combined local and state sales tax rates range between 5 percent and 10 percent, depending on the state.

For many years, Amazon enjoyed a competitive advantage by avoiding the collection of sales tax in many U.S. states, according to experts. The company became the world’s largest online retailer thanks partially to its tax strategy and state subsidies.

To take advantage of the tax loophole, Amazon first located its fulfillment centers in states with a small population or no sales tax.

This is one of the ways by which the company has kept its prices low compared to local retailers and brick-and-mortar stores such as Wal-Mart and Best Buy.

“When you allow the out-of-state companies to not collect sales tax, you’re effectively giving them a price advantage over your own local businesses. So this is a bad tax policy and economic development policy,” Davis said.

“If sales tax matters this much at this stage of Amazon’s development … one can only imagine how much this government-granted competitive advantage propelled Amazon’s growth back when it was merely a book retailer,” stated a report by the Institute for Local Self-Reliance, a nonprofit research organization.

As recently as 2011, Amazon was collecting sales tax in only five states, said Davis.

Today, taxes are no longer a central part of Amazon’s business strategy, so it is an overstatement to say Amazon is not collecting any sales tax, said Davis.

However, Amazon definitely delayed it as long as possible to gain a competitive advantage over other retailers, he said.

In addition, Amazon received public subsidies worth over $730 million for its facilities and data centers built in the United States between 2000 and 2014, according to a report by Good Jobs First, a nonprofit organization that tracks public subsidies.

“Amazon has been very successful in extracting subsidies from state and local governments,” Davis said.

Businesses, in general, are often negotiating with states to get these types of packages by promising to create jobs in that state, he said.

And these subsidies sometimes take the form of a tax exemption or a tax credit.

“Hence, they are getting a significant chunk of funding out of the public budget,” he said.

Traditional retailers are losing foot traffic and sales to online stores as consumers increasingly shift to online shopping. And Amazon has been the biggest winner of this trend.

Retail jobs have fallen sharply this year due partially to online stores. Major department stores, including J.C. Penney, Sears, and Macy’s, have announced layoffs of thousands of employees, and hundreds of store closures. Job cuts are expected to rise as traditional retailers continue to struggle with weak sales and profits and, in some cases, bankruptcy.

The retail industry employs nearly 11 percent of the total U.S. nonfarm labor force. The impact of these job cuts may even surpass the impact of manufacturing job losses, according to experts.