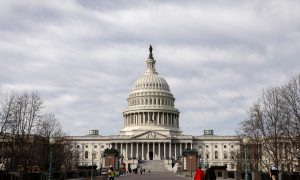 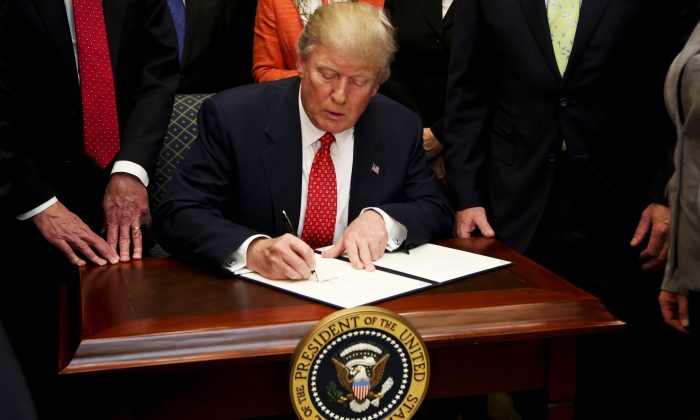 President Donald Trump signs an Executive Order calling for the review of the Waters of the United States Rule, in the Roosevelt Room of the White House in Washington on Feb. 28, 2017. (Aude Guerrucci-Pool/Getty Images)
Trump Administration

The White House said on Jan. 16, that President Donald Trump has signed a bill that will require some 800,000 federal employees to be compensated for wages lost or work performed during the partial government shutdown.

Wednesday’s bill signing was closed to the media. The House and Senate had voted to give the workers back pay whenever the federal government reopens.

The shutdown is in its fourth week.

Federal employees received pay stubs with nothing but zeros on them last week.

The shutdown has resulted from a dispute over border wall funding. Democrats remain opposed to Trump’s demand for $5.7 billion. They say they’ll discuss border security once the government reopens.

It’s the first group of rank-and-file Democrats to meet with Trump during the shutdown, which stretched into its 26th day on Wednesday. The White House has been trying to peel lawmakers away from Democratic House Speaker Nancy Pelosi, but invitations to Democrats earlier this week were declined.

The White House said the meeting was fruitful.

“The President and his team had a constructive meeting with bipartisan members of the problem solvers caucus. They listened to one another and now both have a good understanding of what the other wants. We look forward to more conversations like this,” White House press secretary Sarah Sanders said in a statement.

“The President and his team had a constructive meeting with bipartisan members of the problem solvers caucus. They listened to one another and now both have a good understanding of what the other wants. We look forward to more conversations like this.”

Rep. Dean Phillips (Minn.-D) said Wednesday that the fact that lawmakers of both parties were sitting down and talking with Trump was progress in itself. And Rep. Max Rose (N.Y.-D) said trust was built within members of the group. He said both Trump and Vice President Mike Pence “spent a lot of time” with the Democrats, calling the talks “very sensible discussions that involved listening and speaking.”

Phillips said the group was not there to negotiate but “to better understand each other, which I think we did … and perhaps provide a little bit of daylight through which we can walk.”

Hi, Mr. President. I’m in town, too! 🙋🏼‍♂️Ready to talk about:
a) re-opening our government so federal employees, many of whom ensure our safety and security, get paid
b) fixing our broken immigration system
c) securing our borders
d) enhancing port security#letsgetitdone

The House has passed a Democratic measure to reopen the government through Feb. 8 and provide $14 billion in emergency spending for recent hurricanes, wildfires and other natural disasters.

The bill was approved 237-187 on Wednesday, mostly along party lines, but appears dead on arrival in the Republican-controlled Senate. The White House says President Donald Trump will veto the bill, calling it unacceptable without a broader agreement to address what Trump calls a crisis at the U.S.-Mexico border.

Some Republicans accused Democrats of politicizing disaster aid, noting that the bill put many GOP lawmakers who support Trump’s proposed border wall in the position of voting against disaster aid for their own districts.

House Appropriations Chairwoman Nita Lowey said the bill would help families and communities recover from disasters while reopening the government.