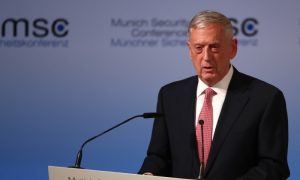 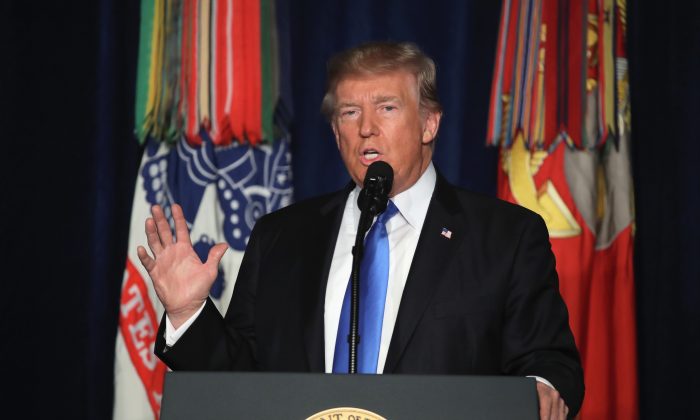 President Donald Trump speaks on his administration's strategy for the war in Afghanistan at Fort Myer in Arlington, Va., on Aug. 21. (Mark Wilson/Getty Images)
US

President Donald Trump gave an overview of the new U.S. strategy for the war in Afghanistan during his Aug. 21 speech at Fort Myer in Virginia. Analysts foresee U.S. operations in Afghanistan that will be more focused, with less bureaucracy and fewer restrictions.

As part of this new direction, the United States will move away from nation-building operations where in the past it has tried to install in other countries a government similar to its own. Trump said, “We are not asking others to change their way of life, but to pursue common goals that allow our children to live better and safer lives.”

Trump also said that moving forward the United States will not announce all military plans publicly, stating that “conditions on the ground, not arbitrary timetables, will guide our strategy from now on.” Trump has also entrusted more authority to Secretary of Defense James Mattis, and has run military operations with less micromanaging and less bureaucracy.

According to Drew Berquist, a veteran of the intelligence community and founder of security-focused website OpsLens, Trump’s speech likely resonated with many troops on the ground.

“What he said last night and the approach he is taking, this has been needed to be done for a long time,” he said.

Berquist said “We always get caught up in nation building, and it clouds the mission.”

According to Dr. Robert J. Bunker, adjunct professor at Claremont Graduate University, “Following a nation-building strategy in Afghanistan was a major strategic mistake.”

Bunker noted in an email that the United States has been “blindly throwing money at the security environment.” Much of the money, he said, has ended up in the pockets of former Afghan president Hamid Karzai, his family members, those close to him, and “other corrupt governmental officials.”

He noted, however, that while nation-building didn’t work in the past, the United States also can’t “cut and run,” which would likely allow the Islamic State and the resurgent Taliban to seize control of the country. If the country again became a safe haven for terrorists, he said, it would give the groups a new home base to plan and launch attacks against the world.

Taking into account this “brutal reality,” Bunker believes the best strategy is what he calls a “Render Safe” course of action, whereby the United States uses a blend of military and diplomatic options, and possibly pays off select tribal and Taliban warlords to “turn them against the more hardline Jihadist-leaning factions.”

According to Paul Rexton Kan, professor of national security at the U.S. Army War College, nation-building operations did not necessarily go well in the past. He notes, “At best you can say with Iraq the goals were inconclusive. And in Afghanistan it’s ongoing, obviously.”

Kan believes, as Bunker also noted, that the new U.S. direction would likely include a simultaneous diplomatic mission. Trump noted during his speech that he would work diplomatically with Pakistan and India on the conflict.

Kan noted, however, that the diplomatic side often takes a bit more time to get running, and currently the State Department is still understaffed. He said, “we can surge the military but to surge diplomacy, that’s a little trickier.”

Both Berquist and Kan believe that while Trump may move away from the broader nation building operations—some limited operations such as training Afghan forces may continue.

Berquist said the training of Afghan troops may be more focused, such as helping train Afghan special operations forces, and he noted “We’ve been working with them for a long time now, and they’ve gotten a lot better.”

Kan noted the immediate concern is that fewer restrictions could lead to more collateral damage. Innocents could get caught in the line of fire, and this could likewise fuel an insurgency. He added, however, that because “Mattis is a keen student of history” and is familiar with the threat and situation in Afghanistan, his strategy will likely take this into account.

“We also know we can’t kill our way out of this war,” he said. “The military dimension is only part of the way we are going to meet the goals we have in Afghanistan.”

Bunker said that loosening rules of engagement can be a “double-edged sword.” On one side, he said, “Our combat operations might be greatly enhanced,” but on the other side, “if we begin to take out increased numbers of non-combatants (or at least perceived non-combatants), we will get immediate blowback from an insurgency perspective with more and more new enemies being made.”

According to Berquist, however, the bureaucracy for troops goes beyond rules of engagement—and extend into complex strategies based around planned timelines and other data. He noted that when he first deployed, leading up until today, “the rules were so different on what you can do and what you can’t do, because you got into all these arbitrary timeline debates and number debates.”

Berquist believes that there will be few civilian casualties as long as the U.S. keeps a smaller footprint in the country. He noted that if Trump focuses on terrorists, as he said would be done, many operations will be targeted, and backed with strong intel.

Meanwhile, he said, the Taliban and other U.S. adversaries were in the past well-versed in U.S. rules of engagement, and would often use these boundaries to their advantage. “Previously they had known from talking to sources what Americans could and could not do, and they would use that against us,” he said. “They knew we were politically weakened and handcuffed.”

Moving forward, Berquist said the new strategy brings back to U.S. adversaries “that uncertainty or fear that had started to slip away.”