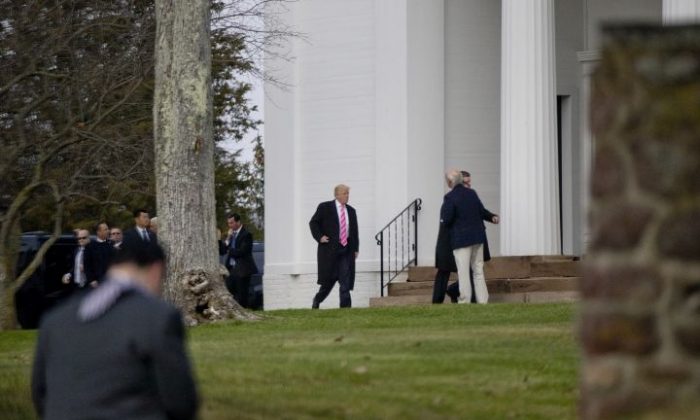 President-elect Donald Trump is seen from the media van in the motorcade as he walks into Lamington Presbyterian Church in Bedminster, N.J., Sunday, Nov. 20, 2016. (AP Photo/Carolyn Kaster)
Politics

President-elect Donald Trump said he’ll meet with the New York Times after he announced on Twitter that he was cancelling the meeting inside the Trump Tower.

The Times spokeswoman, Eileen Murphy, confirmed the meeting on Twitter. “Mr. Trump’s staff has told us that the President Elect’s meeting with The Times is on again,” she tweeted.

“President Elect will meet with our publisher off-the-record. Then, on-the-record with our journalists & editorial columnists (sic),” Murphy tweeted.

Trump’s meeting with the Times brass was scheduled to be on the record—unlike his Monday meeting with executives from CNN, ABC, CBS, Fox, and ABC. Trump, according to the Times, didn’t agree to those terms and sent out several tweets.

1 of 2 Mr. Trump’s staff has told us that the President Elect’s meeting with The Times is on again.

2 of 2 President Elect will meet with our publisher off-the-record. Then, on-the-record with our journalists & editorial columnists.

Hope Hicks, a Trump spokeswoman, told the newspaper that the president-elect would attend.

Hicks spoke with the Times’s publisher, Arthur Sulzberger Jr., on Monday afternoon and she told him Trump’s schedule had become busy and he would only have time for the off-the-record session, Murphy said. According to the paper, Sulzberger said it wouldn’t work.

“I cancelled today’s meeting with the failing @nytimes when the terms and conditions of the meeting were changed at the last moment. Not nice,” Trump tweeted at around 6 a.m. on Tuesday.

Perhaps a new meeting will be set up with the @nytimes. In the meantime they continue to cover me inaccurately and with a nasty tone!