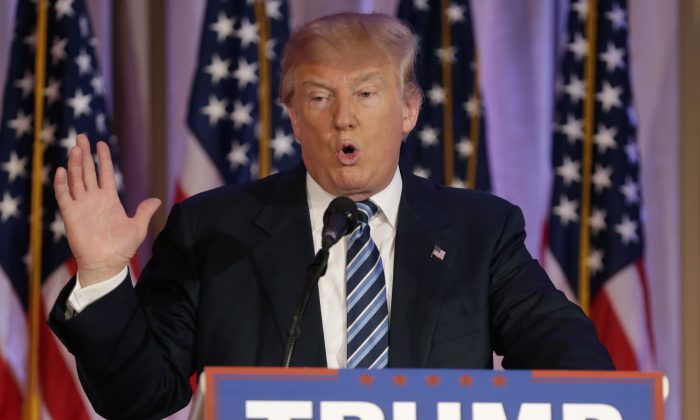 He says he has not ruled out New Jersey Gov. Chris Christie, a former rival who was one of the first politicians to back Trump.

Christie was recently promoted in Trump’s campaign to chairman of a transition team which will prepare his campaign for the general election in November.

“I have a list of people that I would like,” Trump said May 10 in an interview with The Associated Press.

The real estate mogul and former reality television star said he’s giving special weight to political experience because he wants a vice president who can help him “with legislation, getting things through” Washington if he wins the White House.

“We don’t need another business person,” said Trump, who touts himself as one of the best in that category.

He also said choosing a person who’s previously held elected office would help with the process of looking into the person’s background, in part because that person already would have been checked out by voters, the news media and to some extent the government.

“For the most part, they’ve been vetted over the last 20 years,” he said.

The news comes only hours after Trump announced that Ben Carson was removed from the VP vetting process and replaced by controversial campaign manager Corey Lewandowski.

“What Trump wanted from Carson were names of who he would recommend for a potential candidate. He was among several other people making recommendations,” said Armstrong Williams, Carson’s business manager the The Daily Beast.

“Once those names were submitted, they decided to have [Corey] Lewandowski head up.”

“It’s passed off to him,” Williams said of the transfer of roles to Lewandowski. “That vetting process is a long process and a tedious process. Now Carson is involved in making sure that everything goes well with Thursday’s meeting.”Trump said that picking the running mate is a “group effort”:

“Honestly, we’re all running it. It’s very much a group effort,” said Trump, adding that he’s in no rush to announce his pick.

“I do think I don’t want to make a decision until the actual convention. Not even before it. I mean until it,” he said.