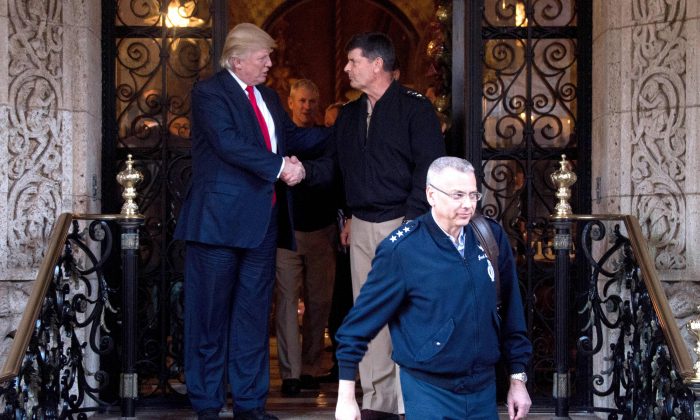 US President-elect Donald Trump (L) shakes hands with US admirals and generals from the pentagon following meetings at Mar-a-Lago in Palm Beach, Florida, on Dec. 21, 2016. (JIM WATSON/AFP/Getty Images)
Politics

WEST PALM BEACH, Fla.—President-elect Donald Trump appointed an experienced hand from the George W. Bush era to his national security circle Tuesday and a figure from the Trump Organization to make international deals.

The president-elect also appointed one of his main advisers on U.S.-Israel relations as special representative for international negotiations. Jason Greenblatt has worked for the Trump Organization for over two decades and currently serves as its executive vice president and chief legal officer.

In the statement, Trump said Greenblatt “has a history of negotiating substantial, complex transactions on my behalf,” and has the expertise to “bring parties together and build consensus on difficult and sensitive topics.”

Trump’s West Wing is shaping up to have multiple power centers. Chief of Staff Reince Priebus and senior adviser Steve Bannon will work as “equal partners,” according to Trump, and counselor Kellyanne Conway is also expected to have autonomy. Trump’s influential son-in-law, Jared Kushner, will also have a direct line to the president.

Trump has long stoked rivalries among his staff in business and in the campaign. But doing so in the White House could sow confusion and slow decision-making.

Trump recently named his other top adviser on Israel, David Friedman, as his pick for U.S. ambassador to Israel.

The president-elect is spending the holidays in his Florida resort where he’s held a steady stream of meetings with senior staffers, advisers and business executives. A number of key posts in his government remain, his transition team saying that he will fill those positions in the coming days.