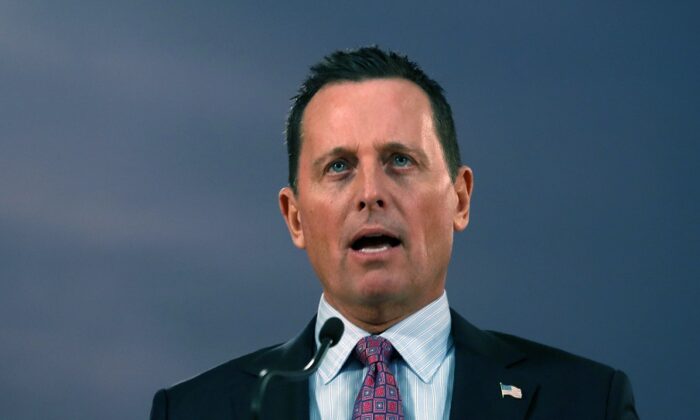 When someone you know becomes the acting director of National Intelligence, are you spooked or do you celebrate?

In this case, I’m celebrating, because Richard Grenell, whom I’ve known off and on for about a dozen years, in such venues as Italian restaurants in Beverly Hills and at Republican conventions in Tampa and beyond, is an extraordinary person of great courage (personal and political), a true American patriot, and a fascinating eclectic mind.

He is truly a man of what we used to call culture.

Is that enough? Does that mean I think he’s the right person for the job, which is of tremendous importance at this particular juncture in history? You bet.

I also salute POTUS for a superb choice.

When last or currently seen, Ric was the ambassador to Germany. Most ambassadors more or less vanish into the woodwork of Tony dinner parties and endless boring communiqués.

Not Grenell. He has turned his perch in Germany into the most powerful American post in Europe, pushing on Angela Merkel and company in a variety of ways, particularly making sure they didn’t cave to the mullahs of Iran.

He made remarkable progress in this regard, becoming, in a sense, a one-man bēte noire at the EU.

Once upon a time, he was John Bolton’s communications director at the U.N., but he has outstripped his former boss in a variety of ways.

Oh, and yes, he beat cancer.

But now he will be taking on his biggest assignment yet, battling with the Deep State at its headquarters. As most readers know, the FBI, CIA, and other intelligence agencies (there will be 17 under Ric’s supervision) are currently under investigation by U.S. Attorney John Durham for events surrounding the provenance of the Russia probe (aka Spygate).

The results of this investigation, when they come down, have the potential for creating one of the greatest explosions in American society since the Civil War.

President Donald Trump will need a “wingman,” as Eric Holder so noxiously described his relationship as attorney general to Obama. In Grenell, he will have one and more.

We can all take at least a partial deep breath.

And one last thing, because it’s in so many of the headlines you read, even though it’s of scant importance. Grenell will be the first “out” gay in the Cabinet. I might add he did this far before the guy from Indiana currently running for president.