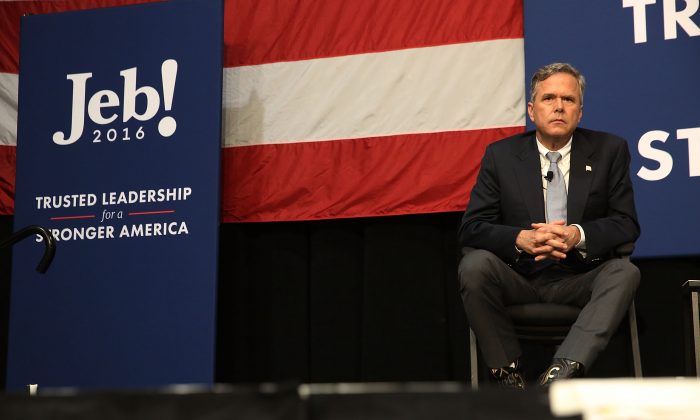 Trump Is Going After Hillary the Same Way He Went After Jeb–But Will It Work?

Donald Trump is in a similar position he was in only a few months ago.

His main rival is an extremely well-funded, life-long professional politician who has tied herself not only to a previous president both in name and policy, but in scandal and weakness.

In February, that rival was Jeb Bush. Trump’s handling of Jeb was not to attack the candidate himself, but instead, to make an unprecedented critique of Jeb’s brother and the unpopular Iraq War:

“Obviously the war in Iraq was a big fat mistake,” Trump said during the debate in South Carolina.

He then launched into criticizing the former President George W. Bush, who he had previously said should have been “impeached” for lying about the information going into the war.

On stage, Jeb defended his brother saying that his brother “was building a security apparatus to keep us safe,” but that argument got lost in Trump’s rebuttal when he pointed out that the September 11th attacks happened under his brother’s watch.

A week later, Jeb Bush dropped out after spending $150 million dollars and placing a distant 4th in South Carolina.

Now that Donald Trump is facing off against Democratic frontrunner Hillary Clinton, he has done little to change the tactics and themes of his candidacy: distrust the old and envision the new.

The first most obvious parallel is tying Hillary to Bill Clinton, and focusing on the former president’s weaknesses, namely bringing up rape allegations made in the late 1990s. The question came up in a Sean Hannity interview with Trump on Fox News:

The accusation refers to Juanita Broaddrick’s 1999 accusation that Clinton raped her in Little Rock, Arkansas during his 1978 campaign for governor of the state.

Trump’s modus operandi, if his race against Bush is any indication, is to go after the candidate’s name-brand and tie the candidate to the caveats that come with that.

Amazing that Crooked Hillary can do a hit ad on me concerning women when her husband was the WORST abuser of woman in U.S. political history

To add to Trump’s fire, Hillary Clinton has been tying herself closer to Bill Clinton, saying she wants him to lead the economic revitalization:

“My husband, who I’m going to put in charge of revitalizing the economy, ’cause you know he knows how to do it,” Clinton told a Kentucky crowd, adding though, in a later interview that he would not have a place on her cabinet.

In reaction, Trump responded by retweeting “Hillary Just Handed @realDonaldTrump a Huge Gift: Promising to Put Bubba in Charge of the Economy!”

Bill Clinton’s favorability leaving office in 2001—despite all the negative publicity and scandal surrounding his impeachment—was still at 66 percent according to Gallup polls, compared to George W. Bush’s 34 percent favorability in 2009.

In recent years, however, those favorability ratings have been in flux, with W. Bush’s favorability up to 52 percent as recent as 2015, while Bill Clinton’s favorability dropped to 53 percent in a poll this past January.

These all point to weaknesses in the Clinton campaign that are hard to overcome—just as Jeb found out, it’s hard to run from a name—and Trump’s tactics could work if Clinton ignores the imperfect legacy she’s come to embody and inherit.