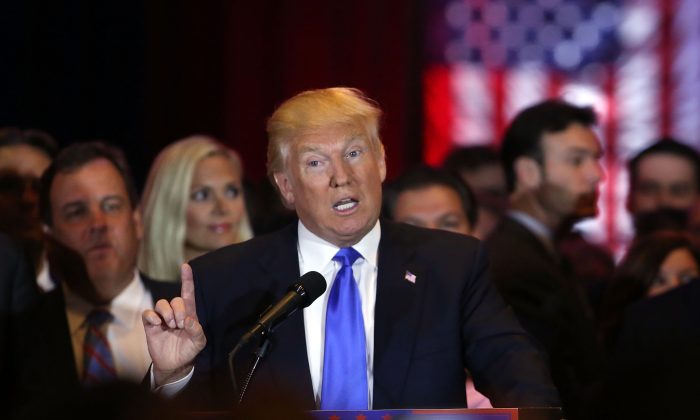 Then Republican presidential candidate Donald Trump speaks to supporters and the media at Trump Towers following the conclusion of primaries Tuesday in northeastern states in New York on April 26, 2016. (Spencer Platt/Getty Images)
2016 race

In the last 2 months, Trump has improved his polling average by 11 percent.

Trump’s surge in the polls comes after meeting with Republican Congressional leaders and getting their public support.

However, House Speaker Paul Ryan has still declined to give Trump his full support.

Clinton’s recent struggle to make headway in the polls may be related to her having to battle on two fronts—her rival in the Democratic primaries Bernie Sanders and Donald Trump. Trump has had a head start on the general election criticizing her on gun rights, immigration, and linking her to unpopular trade deals like NAFTA and TPP.

The Democratic frontrunner would like to pivot to a general election mode aiming at Trump, but has been dogged down by her drawn out primary season with Sanders.

Trump has quoted Sanders’s critique of Clinton, calling her “unqualified” and questioning her judgement.

Hillary Clinton is not qualified to be president because her judgement has been proven to be so bad! Would be four more years of stupidity!

In addition to a tight general election race, the polls also show low favorability scores for both Trump and Clinton. The ABC News/Washington Post gives negative scores for each—Clinton with a negative 16 favorability, and Trump at negative 17.

These ratings make them both candidates with historically low favorability.

Clinton, optimistic that these polls don’t matter, dismissed the poll numbers on NBC’s “Today” show saying “polls this far out mean nothing.”

“They certainly mean nothing to me,” the Democratic front-runner said. “And I think if people go back and look, they really mean nothing in terms of analyzing what’s going to happen in the fall.”