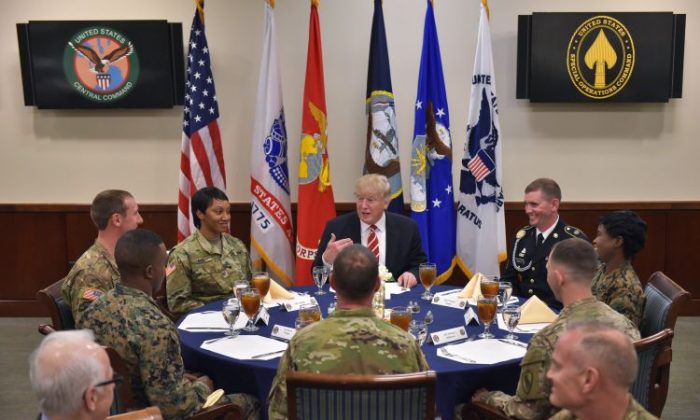 President Donald Trump sits down for lunch with troops during a visit to the US Central Command at MacDill Air Force Base in Tampa, Fla., on Feb. 6, 2017. (Mandel Ngan/AFP/Getty Images)
US

President Donald Trump spoke to the troops at the U.S. Central Command, or CENTCOM, in Florida.

Before that, he had lunch with some of the soldiers on hand.

“Gonna make it a career?” Trump asked one person.

“C’mon, you have to stay,” he urged another.

CNN: Pres. Trump chats with service members over lunch ahead of address at Florida military base … https://t.co/nWR8DOi9IX

“You’ll like it better with me there. You’ll see,” Trump added.

Trump went around and asked the service members if they are going to “make it a career” and they gave him favorable responses.

The president spoke to top military brass, the first time since taking office.

“Finally, on behalf of the entire nation let me express our gratitude to all members of our military,” Trump said. “We salute the Army, Marine Corps, Navy, Air Force, and Coast Guard, along with our civilian defense personnel, who are so important to the success of what we’re doing.”

“As your president, I have no higher duty than to protect the American people.”

Trump said that “we have to defend our nation. And we will do that, believe me. Each and every one of you is central to that mission,” he added. “We will ensure that the men and woman of our military have the tools, equipment, resources, training, and supplies you need to get the job done.”